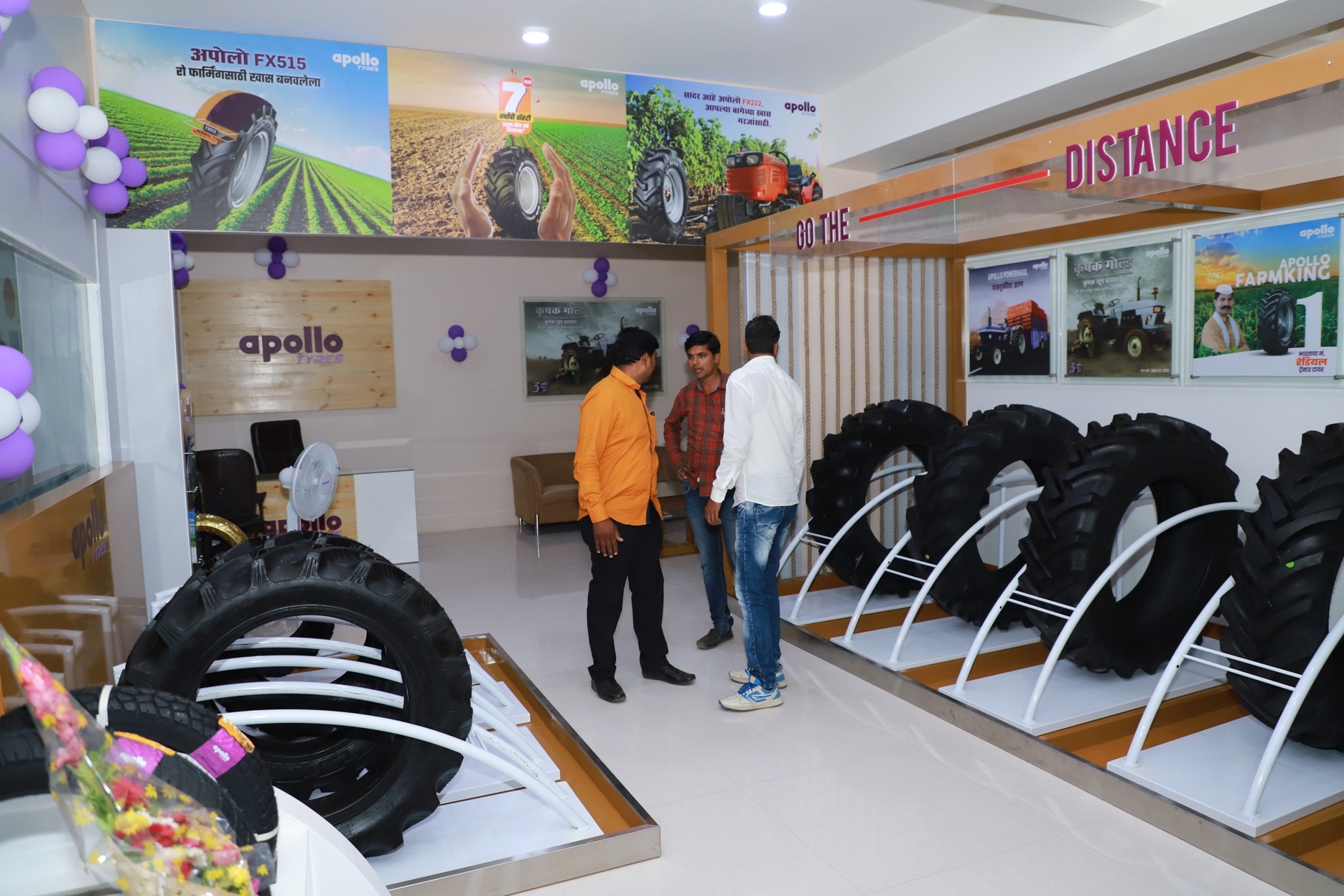 Apollo Tyres recently inaugurated its first full-service outlet for farm/agriculture tires, the first such outlet in India. The facility is located in Satana, Nashik, which is in the western Indian state of Maharashtra and was formally opened to the public by  Rajesh Dahiya, Group Head, Sales & Marketing, Apollo Tyres Ltd. There are many retail outlets across the country for passenger vehicle and commercial vehicle tires. In the case of farm tires however, there are no such outlets which can be termed as state-of-the-art service centers and offer the benefits of trained personnel and a pleasing service environment.

The Apollo Farm Zone is the first such store to be equipped with an automatic tire changer and is staffed by an agronomist who can guide farmers with regard to the proper selection of tires for their farm equipment. The store has an environment where they can sit and relax while their tires are changed or serviced and has a display of tires that showcases Apollo’s full range of tires for agricultural purposes. The Farm Zone also has an automatic tire inflator to measure the right amount of inflation pressure. It will also be stocked with professional repair kits for repair of punctures or any other damage that tires might suffer.

Speaking at the inauguration, Rajesh Dahiya, Group Head, Sales & Marketing, Apollo Tyres Ltd said that all of Apollo’s customers are equally important for the company. This is why Apollo Tyres thought that farmers deserve dedicated outlets for agricultural tires just like passenger car and commercial vehicle drivers were provided with modern retail facilities and a service mentality in the company’s Apollo Zones and Apollo CV Zones. The tire manufacturer plans to build a network of Apollo Farm Zones across the country with almost all states having at least one such outlet to cater to the needs of farmers.

The farm segment accounts for almost 8-10 percent of Apollo’s revenues in India. In this segment, the company is a leading supplier of tires to OEMs due to the advanced technological features seen in Apollo’s farm tires. Nashik was chosen as the location for the first Apollo Farm Zone as it is a prominent agriculture location, with vast grape orchards and Asia’s largest onion market. The area is known for farmers who are progressive and give a good deal of importance to mechanization.

Apollo Tyres was the first company in India to launch farm radials under the ‘Farm King’ brand and has many other firsts to its credit. Farm King is still the leading radial tractor tire In India and has double the life of a normal bias tire. The company was the first to introduce a 23-lug farm tire called the ‘Virat 23’ tire for hard soil application with longest tire life, strongest traction and best puncture resistance. And the list of firsts grows longer with the opening of the first full service outlet for farm tires.