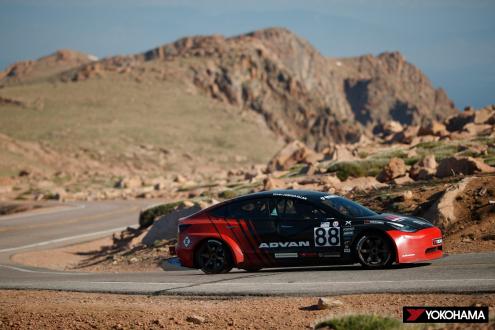 The Yokohama Rubber Co., Ltd., announced today that its US subsidiary Yokohama Tire Corporation (YTC) is supplying ADVAN racing tires to 13 cars competing in the 99th Pikes Peak International Hill Climb to be held in Colorado, USA, on June 27. Last year’s overall championship was won by a car equipped with ADVAN tires, and YTC looks forward to a second straight championship for a car running on YOKOHAMA tires. YTC is again supplying its “ADVAN A005” and “ADVAN A052” tires.

In this year’s Open Wheel division, YOKOHAMA is supporting Codie Vahsholtz, who will be racing in the same 2013 Ford Open car that won the overall championship when driven by his father Clint last year. YTC also is supplying its tires for the 2015 Porsche BBI Turbo Cup entered into the Pikes Peak Open class by driver Raphael Astier, the 2019 champion in the Time Attack 1 Division. Other cars that will be climbing Pikes Peak on ADVAN tires include the 2021 Tesla Model 3 driven by Joshua Allan and the 2020 Porsche 718 Cayman GT4 Clubsport driven by Tanner Foust.

YTC is adding to the excitement of the Pikes Peak International Hill Climb by again supplying its “ADVAN A052” street sports tires as the one-make control tire used by Porsche Cayman GT4 Clubsport vehicles competing in the Porsche Pikes Peak Trophy by Yokohama division. This marks the fourth straight year that ADVAN A052 tires have been selected as the control tire for this division’s cars.

The Pikes Peak International Hill Climb is a hill climb race with a long and illustrious history dating back to 1916. It is also known as the “Race to the Clouds” as the course starts at an elevation of 2,862 meters and covers about 20 kilometers before reaching the finish line at an altitude of 4,300 meters. Cars competing in past races on YOKOHAMA tires included a YOKOHAMA-sponsored electric vehicle (EV) that captured the class championship for three years in a row from 2010 to 2012, setting new time records for EVs in each of those years. Also, as noted above, Clint Vahsholtz captured last year’s overall championship in his 2013 Ford Open equipped with “ADVAN A005” tires.

The consumer tire business in Yokohama Rubber’s new three-year (2021–2023) medium-term management plan, Yokohama Transformation 2023 (YX2023), aims to maximize the sales ratios of high-value-added YOKOHAMA tires, namely the global flagship ADVAN brand, the GEOLANDAR brand of tires for SUVs and pickup trucks, and various winter tires. YX2023 positions participation in motorsports activities as crucial to the company’s effort to develop new tire technologies that will further strengthen the ADVAN and GEOLANDAR brands. Yokohama Rubber therefore is again participating in a wide variety of motorsports events in Japan and around the globe, from top-category to grassroots events.