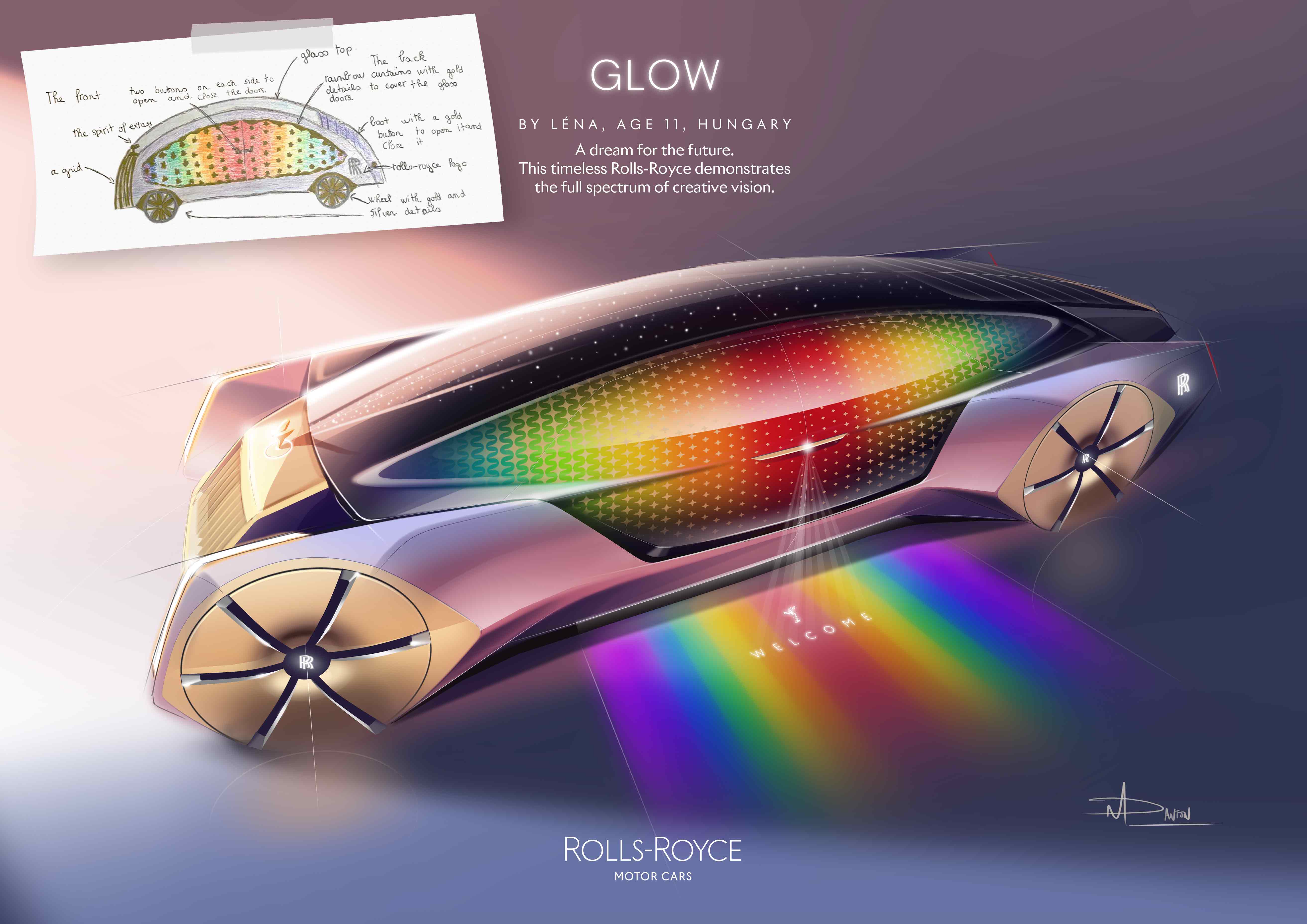 We are delighted to announce the winners in our Young Designer Competition. The entries that stood out for us were those that showed a real depth of thought, effort and expression, and incorporated lots of different details. The winning entrants didn’t just draw ‘the nicest car’: they created amazing experiences that showed the freedom of their imagination, not hindered by physical, real-world constraints.”

“The number and diversity of the entries proves once again something we’ve always believed and lived by within Bespoke Design: that Inspiration is Everywhere. As adults, we’re often too quick to stop ourselves pursuing fantastical ideas. At Rolls-Royce, we encourage clients to be bold and creative, unfettered by conventional notions of what they think a car ‘should’ be like. This competition and the ideas generated reminds us of the incredible power of the question: ‘Wouldn’t it be great if…?’”

Rolls-Royce Motor Cars is delighted to announce the global winners in its Young Designer Competition, which invited children around the world to design their dream Rolls-Royce of the future.

The four category winners, who hail from Japan, France, China and Hungary and range in age from six to 16, will each enjoy a chauffeur-driven journey with their best friend in a Rolls-Royce to school. The designs of the winners and three additional Highly Commended entrants have all been transformed into beautiful digitally-rendered illustrations by the Rolls-Royce Design Team, using the same software and processes as they would in a ‘real’ Rolls-Royce design project.

Devised to provide a creative outlet for children aged 16 and under, confined by Covid-19 lockdown restrictions, the competition attracted more than 5,000 entries from over 80 countries. With no rules or specified judging criteria to constrain them, children were able to let their imagination run free, creating designs of extraordinary richness, creativity and diversity.

Faced with a truly formidable task, the judges selected overall winning designs in four categories – Technology, Environment, Fantasy and Fun – based on the most popular themes that emerged from the 5,000-plus entries. Three further entries that defied categorisation but caught the judges’ attention were Highly Commended; the panel also selected winning entries from the various regions around the world in which Rolls-Royce Motor Cars operates.

Launched in April as lockdown conditions were imposed across the globe, the competition proved an instant success; so much so, the original deadline for entries was extended. Asked only to design their ‘dream Rolls-Royce of the future’, children had complete creative freedom, allowing them to develop ideas of astonishing scope, complexity and vision far beyond the realms of automotive design.

Entries included designs inspired by (amongst other things) unicorns, turtles, space travel, the Egyptian pyramids, Pablo Picasso and bumblebees. Many are capable of flying or travelling underwater; the designs also featured a host of clever devices and novel technologies to save labour, provide pleasure and entertainment and benefit humanity and the environment.

Reflecting on the competition, Torsten Müller-Ötvös, Chief Executive Officer, Rolls-Royce Motor Cars, said, “On behalf of myself and everyone at Rolls-Royce, I would like to thank every single Young Designer who entered the competition, and for all the thought, hard work and creativity that went into their designs. There is some amazing talent out there, and I wouldn’t be surprised if some of our entrants went on to work as car designers one day – perhaps even at Rolls-Royce.”

He concluded, “The most important thing I’ve learned from this competition is that whatever our circumstances, we have the power to create amazing things, because our imagination is always free to fly. I hope the children who took part will recognise this, too, and that it will be something positive they can take from their pandemic experience.”

In addition to the winners that have been announced, regional winners across the Middle East and Africa will be revealed soon.