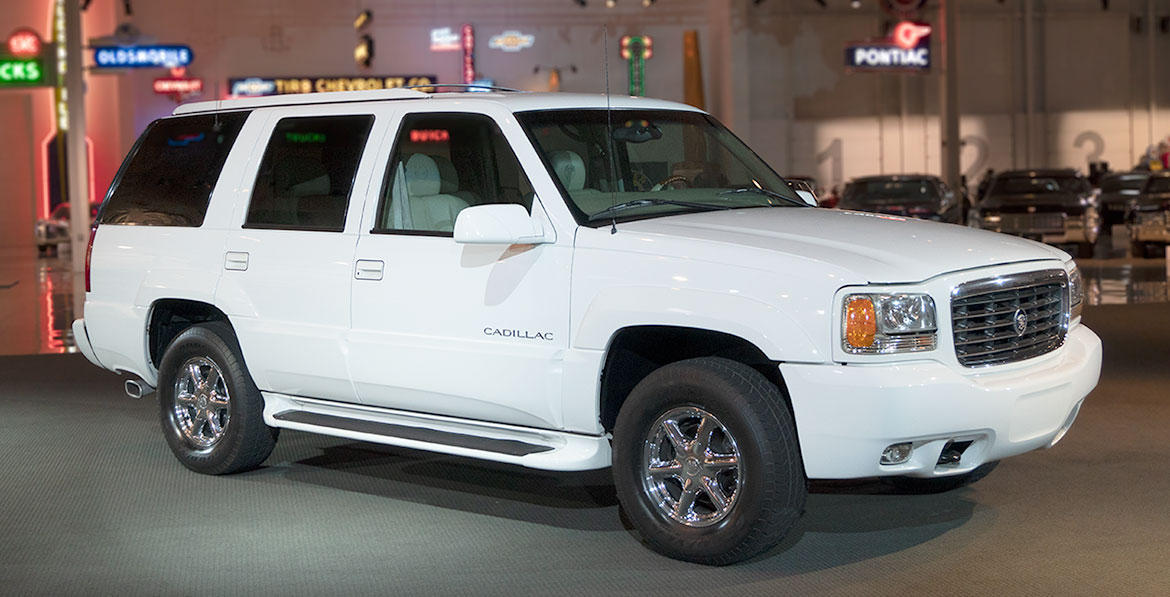 Luxury and elegance have always been embedded in Cadillac’s DNA and phrases such as “as long as I was riding in a big Cadillac and dressed nice… that’s all I cared about’ by late singer Etta James – resonate with many. The Escalade is the epitome of this association and for many, a representation of wealth and the status symbol of “I’ve made it”.

Almost 22 years after it was first introduced at the Pebble Beach Concours d’elegance, Cadillac Escalade continues to be a cultural icon, defining what a luxurious SUV looks like, not just on the streets, but on our screens too.

While the Escalade, Cadillac’s first SUV, was a game changer in the automotive space particularly in the luxury SUV segment, its impact reached the pop culture. While many would associate Cadillac with rock ‘n’ roll, the Escalade has earned its influential place in rap music, without even trying1. This connection that the model has built with the pop culture is not one a brand can buy, but one that is created naturally. From leading TV series, to blockbuster movies and music videos, Cadillac Escalade has stolen the spotlight again and again over the years and sometimes even got as much attention as the stars of the show.

Let’s go down memory lane and relive the progress of the Escalade from one generation to the other and its link to the pop culture.

In August 1998, the first Escalade came to life, making huge noise in the then emerging days of luxury SUVs and quickly being established as Cadillac’s distinguished entry. While everyone was familiar with Cadillac, the luxurious brand at the time resonated more with buyers from older generations who were looking for a more traditional companion.

Enter Escalade. Equipped with Cadillac’s DNA of sophisticated design, advanced technology and performance, the Escalade’s robust reception by influencers in pop culture helped it define a unique place in its segment. Soon after its launch, the luxurious SUV stroke many chords with rappers and athletes and became their SUV of choice. The first-generation Escalade appeared in many movies like “Gone in Sixty Seconds” and was mentioned in hit songs lyrics from A list celebrities including Jennifer Lopez’s “Love Don’t Cost a Thing” in 2000, further connecting the brand with younger customers’ whose response was quick and intense.

The 2002 Escalade was redesigned and engineered in a more distinguished way with features that match its unique styling further grabbing the attention of many stars. The car’s appearances in movies and lyrics rocketed in the years to follow continuing its journey and establishing itself in the pop culture world.

The appearance of the Escalade in this era included a mix of music videos and hit films – from Jay-Z’s music video “Dirt Off Your Shoulder” as well as “Malibu’s Most Wanted” in 2002, to the blockbuster “The Matrix Reloaded” by Wachowskys playing a lead role in the infamous  highway chase scene.

The Cadillac Escalade also reserved a major spot in “Bernie Mac Show”, the American sitcom by Larry Wilmore, from 2001 to 2006 and was featured in “The Hangover” where the villain, Leslie Chow, played by Ken Jong, was transported by a 2005 Escalade by his henchmen.

On the auditive front, in 2003 Big Tymers showed he is a fan of the Escalade, name-dropping it three times in “This Is How We Do” hit and actor Mike Myers sang “Give me an Escalade” in a rap parody for the movie “Austin Powers in Goldmember” in 2002.

The third generation Cadillac Escalade was launched in 2007, based on the GMT900 platform, which was debuted at the 2006 North American International Auto Show, as basis for the next generation of General Motors full-size pickups and SUVs, and replacements for the GMT800 vehicles.

The Escalade was far from losing its charm in the pop culture. The revamped Escalade continued getting the spotlight in a long list of hits – the luxurious SUV was featured in the comedy film the Barbershop’s Third Installment “The Next Cut” in 2007, directed by Tim Story. It also had a key role in the German series “Der letzte Bulle” between 2010 and 2014, the story of the policemen who spent 20 years in a coma as well as “From Paris with Love” in 2010, “Chase” in 2010 and 2011 and the list goes on.

Continuing the strong tie with pop culture, the new generation Escalade was revealed during a special event in the attendance of Autumn de Wilde an American photographer and film director best known for her portraiture and commercial work photography of musicians, as well as her music video work. The 2015 Cadillac Escalade established a new benchmark for hand-tailored craftsmanship and technology thanks to its sophisticated new technology for safety and connectivity.

The fourth generation Escalade continues to dominate our screens and more recently has appeared in the Turkish crime drama series “Çukur” airing since 2017. Similarly, in the Middle East, Cadillac Escalade was in the limelight several times.

The connection of the Escalade and pop culture is by no means slowing down, just recently, Oscar winner, Spike Lee introduced the 2021 Cadillac Escalade with the premiere titled “Anthem” capturing the presence, innovation and movement of the 2021 Escalade. In parallel, Oscar winner Regina King told her “Make Your Way” story of boundaries pushing featuring the newly launched Escalade 2021.

For many decades the iconic Cadillac Escalade has earned and established its position in the automotive industry and as a symbol of status and luxury in pop culture bringing a feeling of achievement and making it aspirational for the younger generation. Today, it is estimated that the Escalade has appeared in song lyrics more than 500 times2 and is one of the most featured vehicles in music and film3!