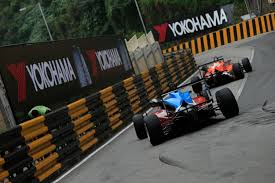 The Yokohama Rubber Co., Ltd. Has announced that the company has been chosen as the tire supplier for the FIA F3 World Cup at the Macau Grand Prix. Yokohama will be supplying “ADVAN” racing tires for the 65th Macau Grand Prix, which is slated to be held in Macau (China) from November 15 to 18.

Yokohama Rubber had supplied tires for this renowned racing event for 33 consecutive years until 2015 and after a brief break resumed its role as the tire supplier last year. Hence, this year will amrk the 35th time that Yokohama tires will be used for the Macau Grand Prix.

Yokohama tires will be used as the control tires for the main race of the Macau Grand Prix, the FIA F3 World Cup, and for the FIA World Touring Car Cup (WTCR) race which will be held concurrently. The tires from Yokohama will also be the preferred tires for the vehicles which will be competing in the other races that will be held as part of the Macau Grand Prix.

The Macau Grand Prix is one of the most famous road races in the world and is run on public roads in the city center of Macau. It was in 2016 that the main F3 Grand Prix race was designated as an official FIA world championship race. It was then renamed as the FIA F3 World Cup.

Yokohama started to supply control tires for the race in 1983, the year in which Formula 3 vehicles which meet international standards began participating in the race. Unlike races held on circuit racetracks, races held on public roadways call for the use of tires that demonstrate high performance on surfaces and conditions which are similar to normal driving conditions. Many winners of F3 races have gone on to become champions on the F1 circuit, including in Michael Schumacher in 1990 and Takuma Sato in 2001.