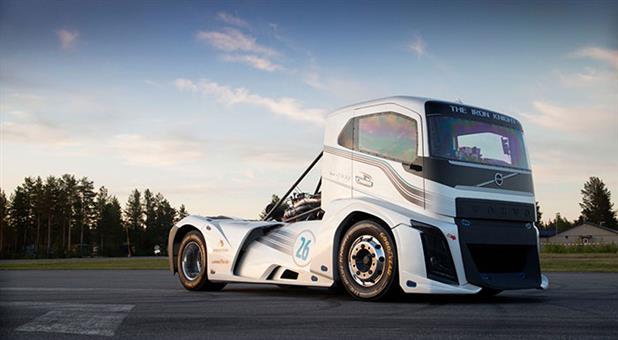 A truck from Volvo fondly dubbed “The Iron Knight” has broken two world speed records for trucks while running on tires from Goodyear. The truck which weighs 4.5 tons and is fitted with an engine having an output of 2,400 hp managed the feat of achieving an average speed of 169.09 km/h or 105 mph in a time of 21.29 seconds, over a distance of 1 kilometer from a standing start. The Iron Knight also set a new record for a distance of 500 meters by achieving a speed of 131.29 km/h (81.6 mph) in 13.71 seconds from a standing start. In the successful attempts to make the records, the vehicle reached a top speed of 276 km/h (171.5 mph).

Goodyear had equipped “The Iron Knight” with special tires. These tires were the outcome of the strong OE partnership and longstanding partnership between the two companies. The technology used for making the tires was based on Goodyear expertise in truck racing. The casings are standard latest generation Goodyear truck tire carcasses that are used normally on European roads. Goodyear stated that the speed records attested to the company’s leadership in the transport industry.

According to Laurent Colantonio, director tire technology commercial of Goodyear Europe, Middle East and Africa with so much power and torque involved, it is not an easy task to ensure that 4.5 tons of truck stays on track at speeds that can go as high as 280 km/h. Colanonio said that the ability of the tires help break the speed records proves Goodyear’s ability to make exceptional tires by using advanced technology and innovation. The same is true when it comes to the normal standard truck tires that the company makes for its customers as it aims to reduce the total cost of ownership while making tires that offer the highest levels of performance.