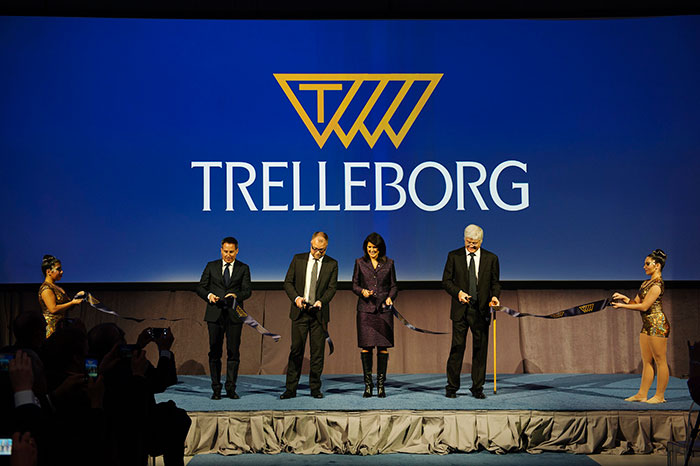 The factory covers an area of 430,000 square feet and involved an investment of USD 50 million. The facility is expected to create 150 jobs by 2018 and will play a crucial role in expanding Treeleborg’s presence in the North American market.

He added that with North America being the largest agricultural market fin the world, the demand for extra-large agricultural tires is growing at a fast pace. Trelleborg is the market leader in this segment. The company’s products are already available in both the United States and Canada. With the establishment of the new plant, Trelleborg is set to be more competitive as it will be able to optimize storage, transportation and distribution costs with a local manufacturing hub.

“We are now located in a modern facility in a prime location with state-of-the-art equipment designed according to the latest Trelleborg technology standards. This means we will be able to capitalise on existing partnership agreements with major original equipment manufacturers (OEMs) and distributors, while facilitating the transfer of technology from one part of the world to another.”

According to Pompei, the Spartanburg facility is one of the most modern and automated manufacturing facilities in the agricultural industry. The production standards at the new factory are at par with those at the company’s facility in Xingtai, China and will help the company to cater to the needs of customers across the North American market.

Though the formal inauguration of the new plant took place on January 27, production of agricultural tires had commenced in late 2015. Eventually, all manufacturing equipment will be installed on a gradual basis by 2018 to ramp up production to meet increasing demand from the market.

Trelleborg currently operates in over 40 countries on a global basis, with the U.S. being the Trelleborg’s largest single market for Trelleborg with net sales in 2014 of around USD730 million USD and over 2,000 employees.