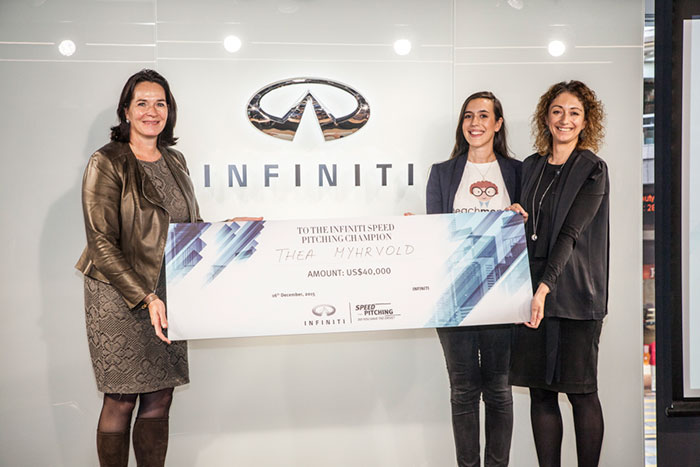 The UAE is the commercial hub of the Middle East. This was recently reinforced when a UAE woman won the “Infiniti Speed Pitching” contest. Thea Myhrvold with her concept of TeachMeNow.com emerged as the overall winner at the finals of the speed pitching contest held by Infiniti, Nissan’s luxury brand in Hong Kong. As an outcome of her victory, Myhrvold will receive USD 40,000 in seed funding for her business.

Infiniti invited entries from all over the Middle East for the “Infiniti Speed Pitching” contest invited entries from all over the Middle East. All contestants were expected to come up with intelligent and innovative commercial propositions. The regional final for the contest was held in Dubai during the course of which they made inpidual presentations to three judges as they took a trip around the Dubai Autodrome track in an Infiniti Q70 for about seven minutes. From the 30 candidates, three were shortlisted to visit the Infiniti headquarters in Hong Kong.

Commenting on the contest, Juergen Schmitz, Managing Director of Infiniti Middle East said that at Infiniti the focus was on rewarding passion and drive. With “Infiniti Speed Pitching’, the company not only wanted to celebrate the spirit of entrepreneurship but also wanted to recognize and reward innovators across the Middle East.

During their three day stint in Hong Kong, the finalists of the contest underwent an intensive mentoring and coaching programme with Infiniti, Nest and international industry leaders from 14th to 16th of December at the “Infiniti Lab” in Hong Kong. On the final day, they were once more asked to pitch their business idea to a panel of Infiniti and Nest senior executives.

“It really came down to the wire, with all three finalists showcasing great ideas in their presentations,” said Francesca Ciaudano, Deputy GM Marketing & PR, Infiniti Middle East. “The decision to award the prize to TeachMeNow.com however was unanimous as she demonstrated a thorough, planned and thought out execution for her idea.”

The winning idea, TeachMeNow, is the concept of a global marketplace for providing education on a one to one basis in real time, allowing anyone to teach and learn. All the classes are live and happen through their virtual classrooms that have live audio, video, interactive document editing, whiteboards and more.

The platform will allow thousands of teachers from around the world who use the website to educate and inspire students from Australia to Saudi Arabia. Most of the tutors on the website are highly experienced and qualified and include Ivy League graduates from institutes like MIT, Yale, LSE, and Princeton.

Infiniti shares a number of common values with TeachMeNow.com. Just like Infiniti is notable for its entrepreneurial spirit and innovation, the TeachMeNow.com website explores the concept of innovation in learning and teaching. With ‘Infiniti Speed Pitching’ the corporation was able to continue to build on this DNA blue print through supporting like-minded inpiduals on the journey to success.