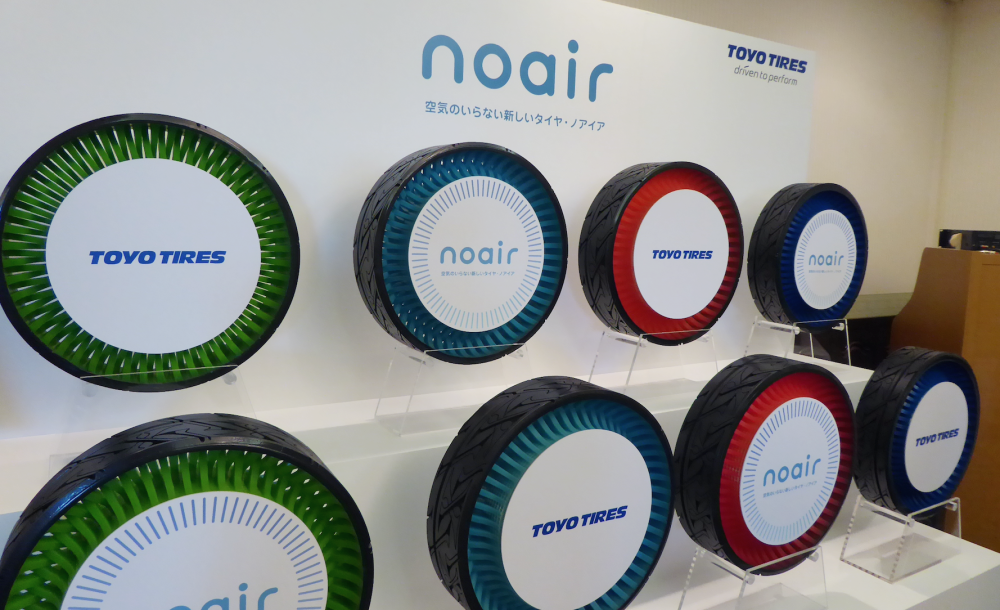 Toyo Tires has announced that the company has developed “noair,”, a neo-futuristic airless concept tire that can support a vehicle without the being filled with air.

Researchers at Toyo Tires closely studied the basic structure of pneumatic tires which cushion the impact from the road surface which are filled with air to offset the impact of supporting the weight of the vehicle. Toyo Tires has been working on the development of airless tires from 2006. In May 2012, Toyo Tires had revealed the prototype of such a tyre at a specialist automobile technology exhibition, Automotive Engineering Exposition 2012, in order to showcase the progress that the company had made in this regard.

The team made fundamental changes in the tire structure from previous prototypes and went on to resolve several issues with the outcome being a product that demonstrated significant improvements in multiple performance indexes and also made it possible to drive the tires on a practical basis. The concept tyre has been named as the “noair” tyre, and Toyo Tires will continue to work on this tyre with the aim of using it in practical applications.

When it comes to the structure of the concept tyre, the tyre is made of special high-rigidity resin spokes in the inner core so that it has sufficient strength to support the load. For the outer tread that comes into contact with the surface, the tyre is made of a rubber material. The section between the spokes and rubber tread, the outer diameter ring is reinforced with carbon fiber reinforced plastic (CFRP) which helps minimize the load on the  spokes.

Earlier prototypes supported the load through an “elliptical spoke configuration,” but the latest variant is an “X-shaped spoke configuration” that alternately crosses the width of the noair tire from the outside to the inside and vice-versa. This completely unique support configuration contributes to the durability of the tyre. When compared to the previous prototypes, the number of spokes has also been doubled (100 pitch)thus ensuring more even distribution of the contact pressure. This also reduces the impact sounds from the spokes that are generated when they come into contact with the ground, and achieves an even more quieter ride.