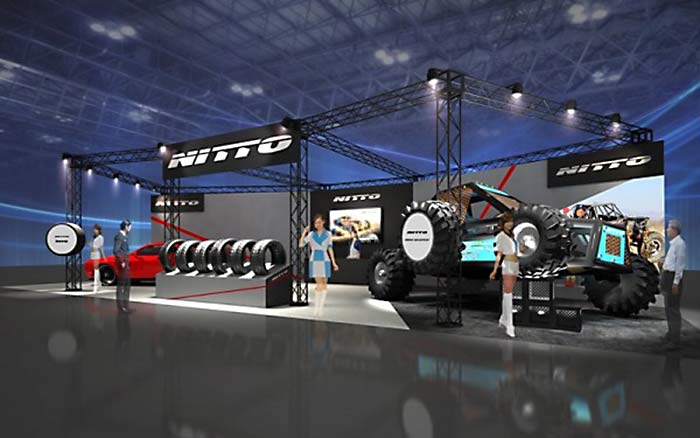 Toyo Tires has announced that it will be showcasing new tyres from both the Toyo Tires range and Nitto at the Tokyo Auto Salon 2018. The vent is scheduled to be held from January 12 to January 14 at Makuhari Messe (Nippon Convention Center in Chiba City.

Toyo Tires will be rvamping the design of its booth in order to highlight the ‘true performance’ capability of the tyres that will be displayed at the show. The diplay will be boosted by the novel sight of a wide range of vehicles from authentic American pickup trucks and SUVs to European sports cars. This is not generally a common sight in Japanese trade shows. Toyo emphasized that it will be prominently featuring its large-diameter tires by mounting them on vehicles in order to emphasize the performance aspect.

Another added attraction at the Toyo booth will be the presence of the trio of renowned rally driver Ken Block, off-road racing star BJ Baldwin and Masato Kawabata of Team Toyo Tires Drift. They are scheduled to hold an interview in talk show format and conduct demonstration runs.

The Nitto booth will feature vehicles that are meant to compete in the highly competitive American off-road races like King of the Hammers and vehicles like “the Dodge Challenger”, which was featured in the film “The Fast and The Furious”.

Nitto will use the Tokyo Auto Salon to unveil “Invo”, the leading example of Nitto brand’s Luxury Sport Ultra High Performance (UHP) tyre which will provide motorists with the perfect combination of ride comfort and quietness, The “Terra Grappler” is a large-diameter Nitti tyre for SUVs that exhibits outstanding performance in wet and dry conditions on all kinds of terrains. Other tyres to be featured prominently at the Nitto booth include those which were launched in the Japanese market like the UHP tire “NT555 G2” and SUV tire “NT421Q”, both of which are rugged yet luxurious, qualities Nitto tyres are known for.