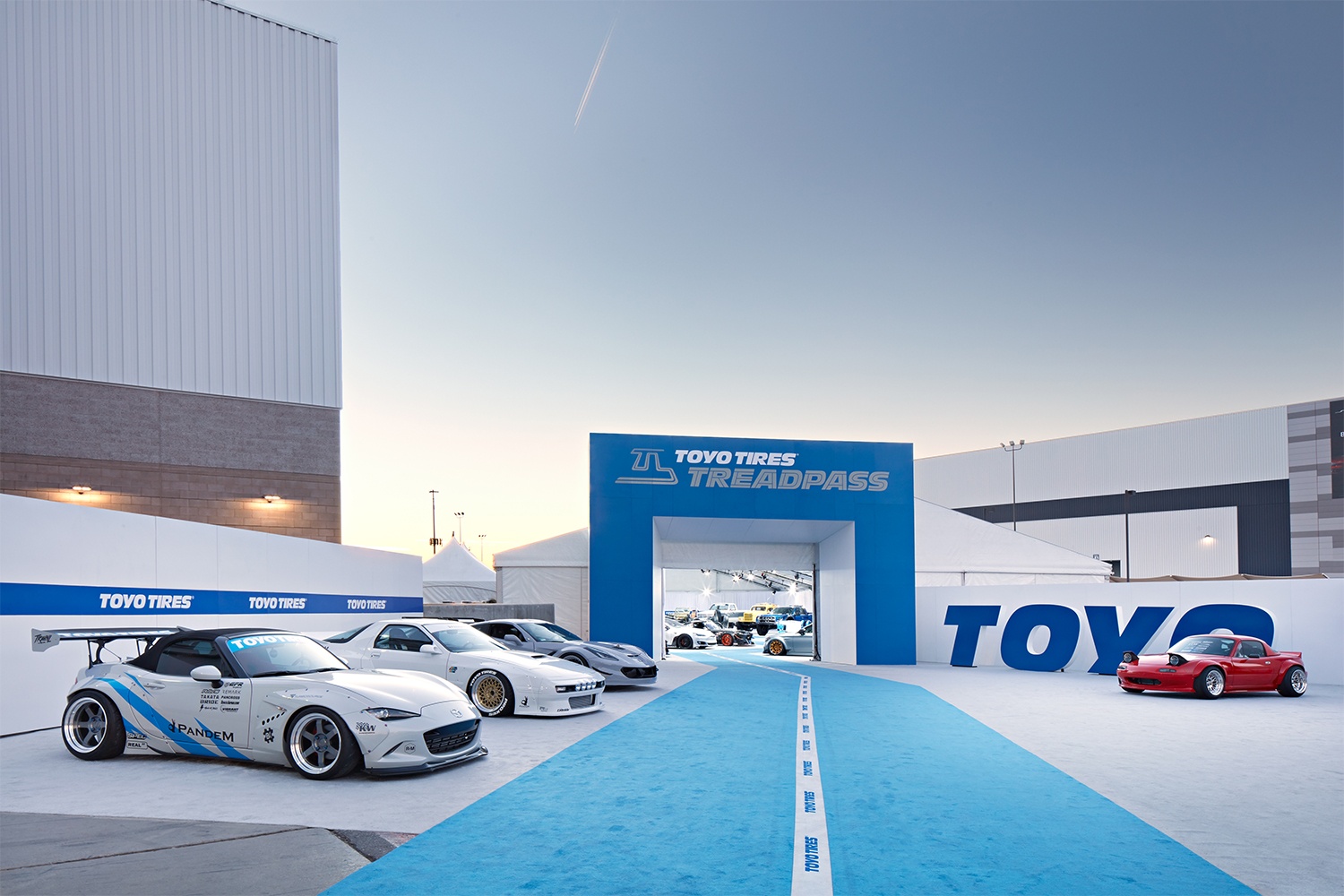 Toyo Tires® is set to make a splash when the SEMA Show returns to Las Vegas November 2-5. The company will unveil over 35 world-debut vehicles and two crowd-stopping art installations. Toyo Tires Treadpass, a widely popular destination for SEMA attendees, will be returning for its 8th year. Treadpass will showcase the largest concentration of world-debut vehicles and is located between the Central and South Halls of the Las Vegas Convention Center. The art installations, one by conceptual artist and designer Joshua Vides and the other featuring Audi builds by Ken Block and Brian Scotto of Hoonigan, will be the centerpiece of the Toyo Tires outdoor booth in front of the South Hall entrance (Exhibit #84160). Attendees will also have a chance to collect limited-edition Leen Customs pins in both locations.

In front of South Hall, attendees will witness the black and white art of Joshua Vides. He has applied his signature style to a range of mediums from shoes to cars and has worked with major brands such as BMW, Fendi, Converse, and the Museum of Contemporary Art Chicago. Vides’ new project with Toyo Tires will showcase his own BMW E30 M3 on Toyo® Proxes® Sport A/S tires.

Adjacent to the Joshua Vides display, Ken Block and Brian Scotto will be revealing all-new Audi builds featuring art by Ricardo Gonzalez aka “Itsaliving.” Block will be displaying an Audi Sport Quattro Tribute built by LCE in Germany and Scotto will be unveiling an Audi Coupe Quattro, a project car he bought in 2004.

Toyo Tires will be bringing back their popular limited-edition pins in collaboration with Leen Customs. The 10 pins featuring new Toyo Tires vehicles will be distributed at designated times during the show. Schedules for the pins will be available at both the Toyo Tires Treadpass and display in front of South Hall.

“Toyo Tires is excited to rejoin SEMA 2021 in person and bring back our celebration of creativity and vehicle execution at Treadpass,” said John Thomas, president and chief executive officer, Toyo Tire U.S.A. Corp. “SEMA allows us to highlight and partner with some of the best builders in the industry. They choose Toyo Tires knowing the right tires elevate the look, feel and performance of their vehicle.”

The SEMA Show is the world’s leading automotive trade event bringing together manufacturers and buyers in every segment of the automotive industry. Toyo Tires has become a staple exhibit at SEMA, showcasing must-see vehicle builds from top builders around the country.

Here are a few of the vehicles that show attendees will be able to view in the Toyo Tires Treadpass.

Built by Ben Craven and his team at Craven Performance, this 1972 Chevy K5 Blazer was commissioned by a client as a tribute to their late mother, Trina. Ben and his team wanted to take this first-generation Blazer and turn it into a reliable beach cruiser or street screamer that you can have a blast with, without drifting too far from its intended use.

The build showcases the boxed factory frame and 8-lug axles with custom chopped doors that align level with the rear bed sides, giving the Blazer subtle and clean lines. The dual spare tire carrier was also removed to continue with the clean classic look of this K5. The interior features their all-out center console that ties into a floating center console for the rear passengers, keeping the cabin lines as clean as the exterior. The Blazer will be riding on Toyo Open Country M/T® tires.

Legendary Concepts in Mt. Pleasant, TX builds modern day vehicles based on legendary vehicle personalities, partnering with Saleen for this year’s SEMA build, which is a modern interpretation of the famous ‘Smokey & The Bandit’ Trans Am in a street truck format.

The base vehicle is a 2021 Chevy Silverado Crew Cab RST and is a complete build including a bespoke widebody kit, aero and styling, wheels, and interior. The L83 5.3L engine is blueprinted and built out to a supercharged 700HP.

The built engine is paired with an all-new Magnuson DI supercharger. The exterior takes on a transformation with a widebody kit and aerodynamics that are perfectly suited for this type of performance truck. The vehicle features Monoblock 8-piston 4D brakes supplied by Brembo, a Magnaflow exhaust, and Toyo® Proxes® ST III tires.

Tim Moceri is debuting one of the most iconic cars ever built and his personal dream car, the 1982 DeLorean DMC 12. For over 18 years, Moceri has been building and racing cars, fine-tuning his craft and creating his own style by taking bits and pieces from all forms of motorsports and incorporating them in his builds.

His main goal with the DeLorean was to take the 80s styling and turn it up a notch, from the clear Ferrari F40 inspires rear engine cover to the one-off custom wide body kit designed by Khyzyl Saleem, and an IMSA inspired twin turbo layout that hangs out of the back of the car. The DeLorean will sit on Toyo® Proxes® R888RTM tires.

Gordon Ting will be debuting a Lexus LC 500 Convertible, his 18th SEMA project build that will showcase his influences in performance and styling while reinforcing form and function.

The build will feature a prototype carbon fiber tonal cover and custom titanium exhaust from Artisan Spirits, race-spec front and rear brake kit by Brembo, and a height adjustable suspension by KW. The Lexus will be riding on forged 21-inch wheels by Titan-7 and Toyo Proxes Sport tires.

Brandon Miller is debuting a 1986 Nissan 300zx, the most ambitious project he has ever undertaken, a full ground up build. For over 20 years, Miller has used his passion as a car enthusiast to modify vehicles, building amazing relationships with people along the way.

The Nissan 300zx will feature a naturally aspirated RB28, a bold choice that has stayed true to Miller’s original vision for the car. Other modifications include a one-off titanium header/exhaust built by Billy Freed at Freed Engineering, one-off carbon kevlar stacks by Niklas Hagen at HN Engineering, and a shaved engine bay and paint by Paul “Seamus” Rogers. Installed on the car is a s14 subframe swap by Mike Poore and the Racing Service Watanabe R types sourced from The Lonely Driver Company. The Nissan 300sx will sit on Toyo® Proxes® R1RTM tires.

The vehicles mentioned above represent just a small preview of the 35 amazing cars and trucks that will be displayed by Toyo Tires at the 2021 SEMA Show.