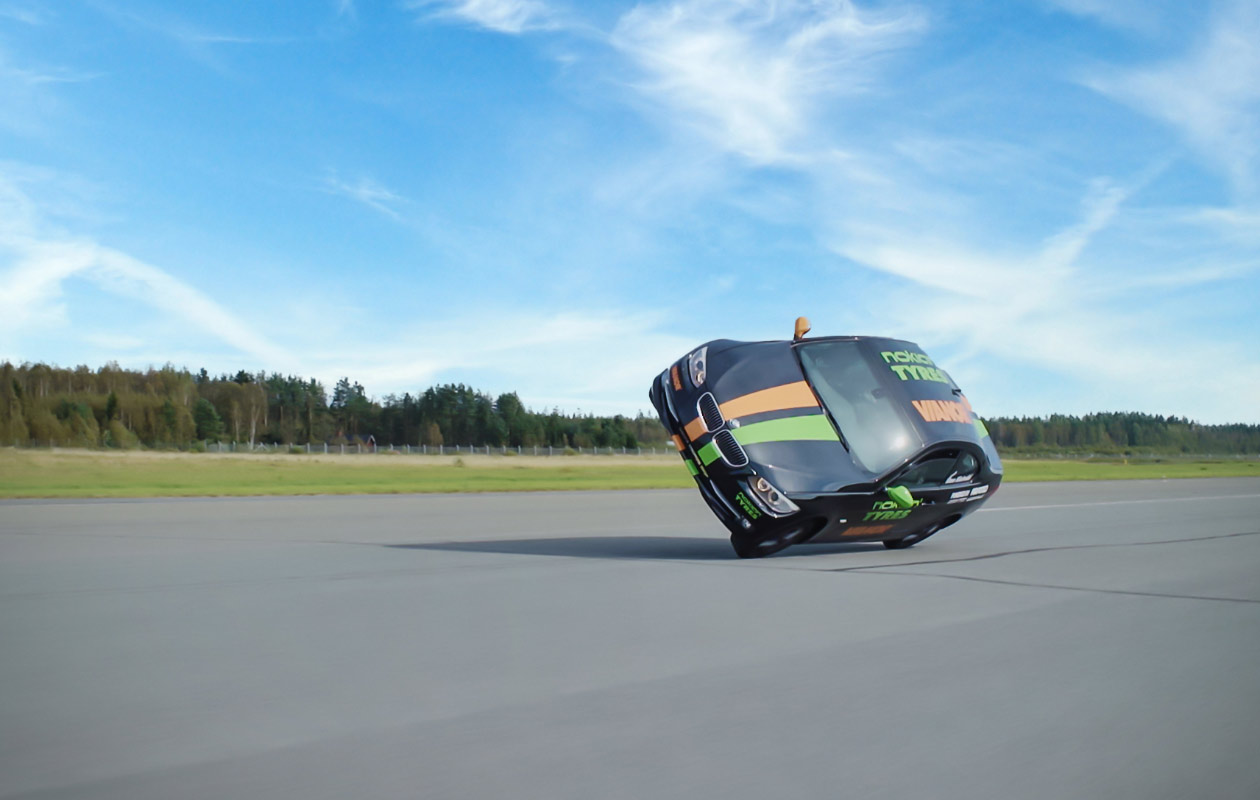 Stunt driver Vesa Kivimäki teamed up with Nokian Tyres’ product development, Vianor’s professional pit crew to set a world record for the world’s fastest car on two wheels, a term popularly called a side wheelie. He achieved a speed of 186.269 km/h. The tires on the car had been reinforced with Nokian Tyres Aramid Sidewall technology. The world record was set at Seinäjoki Airport on 31 August 2016, breaking a record that was set 19 years ago.
When a car is travelling at very high speeds, the role of the tires is very important in keeping its occupants safe. This is especially true when only two tires are all that keeps a car in contact with the road. In order to make an attempt to break the world record, the vehicle needed tires that could be trusted to be durable. The Aramid sidewall technology from Nokian was used to make tires with sidewalls that were highly resistant to cuts and wear.
When driving a car on two wheels, it is the sidewall that retains maximum contact with the road. So, the team at Nokian Tyres came up with a special tire for this very purpose. According to Matti Morri, Technical Customer Service Manager for Nokian Tyres, the Nokian team added aramid fiber to the sidewall rubber compound to reinforce the sidewall and make it more resistant to tears. When this unique sidewall compound technology was combined with a special structure it resulted in the creation of a tire that was good enough to break speed records, The extremely strong aramid fiber is so tough that it is used in defence and aerospace industries and it is this very same technology that is used in the latest range of SUV tires from Nokian.
The passion and the level of creativity needed to make this attempt at a world record are similar to the process that is employed for product development at Nokian Tyres. According to Morri, the team focuses on trying new things and testing its limits in order to come up with innovative new products and technologies for customers.
Vianor’s expert pit crew contributed to the historic feat by providing technical support and taking care of the car used for the attempt and its tires. The team facilitated the entire process by changing the tires at a rapid pace and conveying reports on the condition of the car and its tires in real time to the driver.
On breaking the new record, stunt driver, Vesa Kivimäki said that after making previously unsuccessful attempts to break the record for the fastest car on two wheels, he realized that it was important to have exceptionally durable tires in order to break the record. He confirmed that he could not have broken the record without the support he received from Nokian Tyres and Vianor.
The world record for the fastest car on two wheels was set while confirming to the rules defined by Guinness World Records as the attempt to create the record should be made in a mass produced vehicle, and not in a prototype that is manufactured only for this purpose.
for the record attempt. Within one hour, the car must drive both ways through speed measurement gates that are located one hundred metres apart. The world record is the average of these two measurements.
The world record attempt was made on a runway that is 2 kilometers long and 50-meters wide and the distance used for the average speed measurement was 100 meters. This record broke the previous record that was set in 1997, when Swedish Göran Eliason drove on two wheels at a speed of 181.25 km/h (112.62 mph).