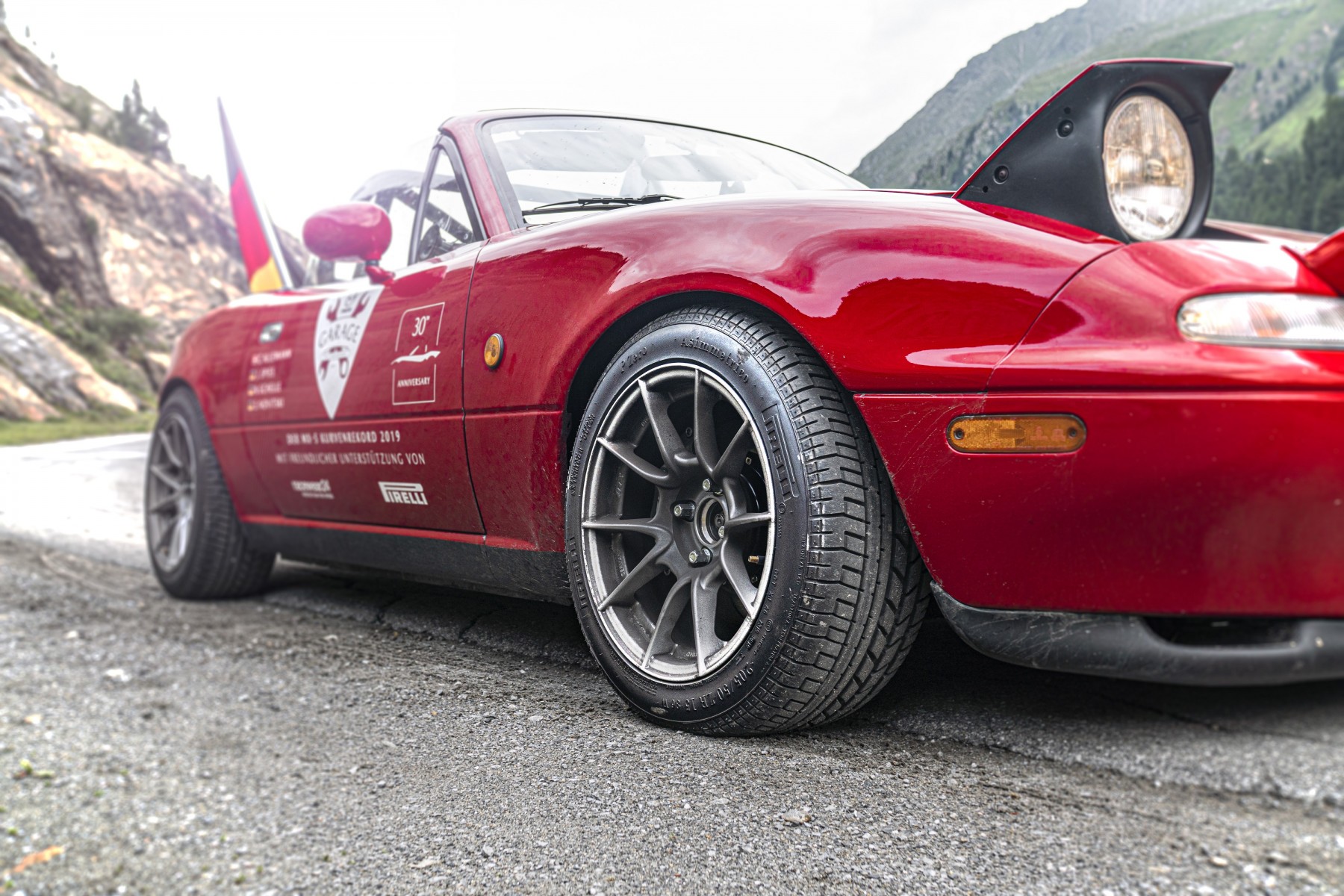 For the first time, a tire belonging to the Pirelli Collezione range, which includes tires for both vintage and modern classic cars, was part of a world record feat. The tire was fitted on a Mazda MX-5 which was used to set a world record for the highest number of hairpin turns in 12 hours of driving. This attempt to achieve the record was made as a part of the commemoration of the 30th anniversary of the iconic first-generation Mazda MX-5 on its 30th anniversary. The record was achieved in a test that was organized by Mazda Motors GmbH (Deutschland).

THE WORLD RECORD
The drive in which the record was set began on 17 July 2019 at 19.00 on Kaunertaler Gletscherstraße (Glacier Road) in Austria. To ensure that everything was aboveboard, the attempt was carried out under the strict supervision of the Hamburg Record Institute for Germany. The drivers at the wheel of the roadster were racing driver Cyndie Allemann, MX-5 Cup driver Jan Spieß, Auto Bild test driver Stefan Novitzki and rally driver Niki Schelle, who took turns at the wheel every hour. Within a period of 12 hours, the team had completed exactly 2,900 hairpin bends. This far exceeded the 1,500 hairpin turns that were needed to achieve the record. The panoramic road in Austrian Tyrol on which the record was broken is 26 kilometers long and has 29 hairpin bends in total, and the climb involved an elevation change of almost 1,500 meters. The road leads to the source of the Kaunertal glacier, at 2,750 metres.

A MODERN TYRE FOR VINTAGE CARS
The Mazda MX-5 used for the record making feat was fitted with a set of P Zero Asimmetrico Pirelli 205/50ZR15 86W tires which belong to the Pirelli Collezione range.
Commenting on the achievement, Jörg Schäfer, Head of Outdoor Driving Tests and Dynamic Instrument Testing at Pirelli Germany, said this tire which incorporated racing technology had exactly the kind of high performance that is needed for such a feat with regard to durability, performance, strength, grip, steering precision, and safety on wet roads. The tire’s tread pattern is the original pattern from the P Zero tire, which has been highly popular for more than 30 years. As far back as 1986, this tread pattern was used for rally cars under a different name, and its design is optimized for high lateral loads.

Pirelli engineers use advanced construction processes and compounds that are currently used in ultra high performance tires to produce the P Zero Asimmetrico for Pirelli Collezione so that it can tolerate the extreme loads during cornering.

THE VIRTUAL DRIVE BEFORE THE RECORD

In order to ensure that the tire’s structure would retain its durability before the world record drive, Pirelli’s team of experts recorded the route profile of the Kaunertal Gletscherstraße on computer and converted it into a digital test programme. This was followed by physically testing the tires in an indoor laboratory for maximum lateral acceleration, both in a straight line and through a variety of corners for 18 hours. The wheel load was also repeatedly tested at 150 per cent of its maximum capacity.