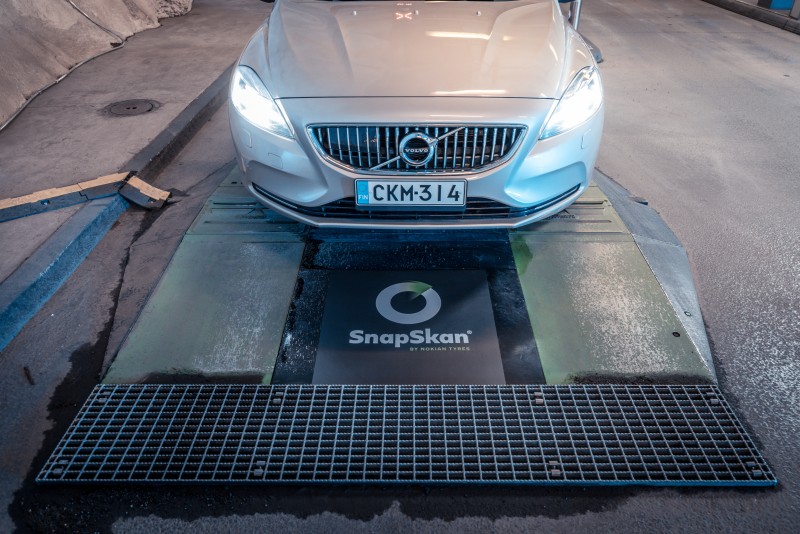 Nokian Tyres P.L.C. has announced that the company would be expanding the scope of its “SnapSkan” digital tire-check service program from just one place in Helsinki to four additional sites in Finland and one in Oslo, Norway. The Snapskan technology assesses the condition of the tires of a vehicle when it driven over a Snapskan device.

Nokian had developed the digital SnapSkan service in collaboration with its Vianor tire retail and car service chain. The technology is based on laser-based 3D-scanning technology which was developed by Sigmavision Ltd. Sigmavision is an Oxford, England-based company that was also involved in the development of Hunter Engineering Inc.’s QuickTread scanning device.

As part of deployment, Nokian installs SnapSkan scanners at parking garage exits or entrances. Drivers pass over the scanner ramp while entering or exiting the parking garage and SnapSkan automatically scans the tires.

Drivers can choose to get the Snapskan digital report either online or by phone message and they can opt-in to get the report either before or after the scanning. If they choose not to opt-in, all the details obtained by SnapSkan about their vehicle will be deleted within a week. If they opt-in for the report, it is sent to the driver’s mobile device free of charge.

The report includes the measurements of tire treads and a code that offers a discount on new tires in selected stores.
Commenting on the Snapskan service, Nokian Tyres President and CEO Hille Korhonen said that caring and safety are at the core of everything Nokian does. It is a unique customer service that differentiates Nokian from other tire manufacturers. Through using SnapSkan, Nokian gets a chance to make motorists aware not only about the condition of their tires but also about the effects the condition of the tires has on road safety in general.

Ville Nikkola, who oversees the Snapskan service at Nokian, said that the company has received immense positive customer feedback about SnapSkan with over 80 per cent of customers who were interviewed saying that using the service involved no effort and that they would recommend it to others. Another key statistic that needs to be considered is that as many as 70 per cent of the customers felt that the service enhanced road safety.