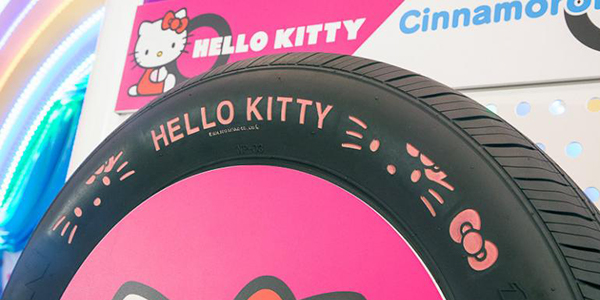 Children who love Hello Kitty have fresh cause to cheer. In addition to merchandise like backpacks, cups, erasers and lunchboxes, they will now be able to see their favourite character on vehicle tyres, thanks to Nexen Tire.

Hello Kitty bicycle tyres have already been available in the market for more than ten years, but Nexen is the first mass-market tyre manufacture to venture into the world of Hello Kitty tyres for automobiles.

For those who do not want to look too feminine with Hello Kitty tyres, there is the Cinnamoroll tire. Cinnamoroll is another popular character of children, a chubby male puppy complete with floppy ears, blue eyes and a plump and curly tail resembling a cinnamon roll.

A sports car with tyres having pink etchings. What will we see next?