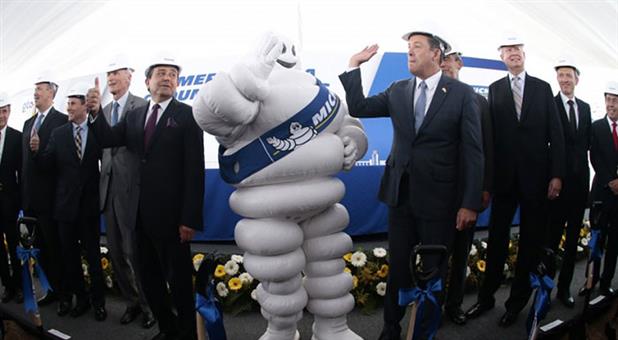 Michelin began construction of its new plant in Mexico with the ground officially broken for the new facility in Parque Industrial León-Bajio, Guanajuato state at a ceremony that was attended by the company’s key executives, VIP customers and government officials. The factory is Michelin’s 21st plant in North America and its 69th in the world. Construction is scheduled to finish by late 2018.

During the ceremony, said Michelin Group chief executive officer Jean-Dominique Senard said that the groundbreaking ceremony attested to the company’s confidence in Mexico’s skilled workforce, manufacturing environment, and the availability of the infrastructure needed to deliver the output of the plant to customers all over North America. He said the plant will cater to the growing demand for the company’s high-tech tires in the North American market. Michelin is planning to invest 450 million Euros in the construction of the plant and this is the largest such investment for the current year. According to the company, the plant will be located on a 98 acre site and will cover 142,000 square meters.

In the long run, production will be ramped up to reach 4 to 5 million tires on an annual basis. The factory will create at least 1000 jobs and will mainly produce Michelin tires for high-performance and ultra-high-performance cars, SUVs, CUV and light trucks.

“We are excited to celebrate this occasion with so many of our valued customers and respected government leaders across León and Mexico who have helped us to reach this key milestone,” said Mike Boggs, director of Michelin Mexico. “We are eager to join the León business community and look forward to establishing long-term relationships here.”

The factory is expected to make significant difference to the local economy as it further fortifies Mexico’s positioning as an investment destination. Guanajuato state governor Miguel Márquez Márquez sees Michelin’s arrival as marking “a before-and-after in the automotive industry in the state.” He added that this is the most important investment in León so far. He expressed his hope that the arrival of the plant will act as a trigger for social and economic development.