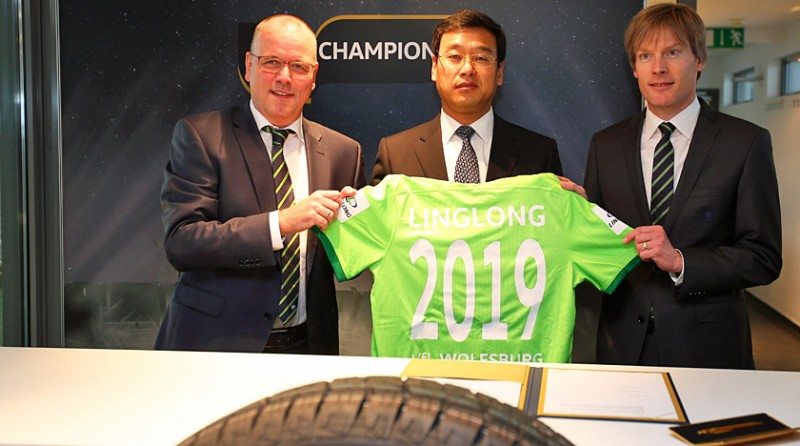 Leading Chinese tire manufacturer, Linglong tire has renewed its partnership agreement with VfL Wolfsburg. The two organizations signed the official contract for the renewal of the partnership on May 23, 2019 and Linglong Tire will continue to be one of the club’s “club of Champions” partner.

The signing ceremony was attended by Li Wei, Vice President of Linglong Tire and was organized by VfL Wolfsburg in Foshan China. Speakign at the ceremony, Wei said that Linglong was very glad to continue the partnership with Vfl Wolfsburg as both the brands benefited from the partnership.

Linglong Tire’s partnership with Vfl Wolfsburg dates back to the beginning of 2015 when the company became the football club’s first international partner. Both organizations further extended their partnership in 2017 when they renewed the partnership agreement and Linglong became the “club of Champions” of VfL Wolfsburg. As part of the partnership Linglong visited “tigerkids” club in Shanghai to provide both the coaches and the children there with assistance along with the members of the of the VfL Wolfsburg club.

Wang Feng, CEO of Linglong Tire said that the collaboration with Wolfsburg over the past four and a half years has been a thrilling journey during which the club showcased its tough spirit and will to win. These same values are part of Linglong’s core values. He felt that the partnership promotes the globalization of Linglong brand and looked forward to a bright future together with VfL Wolfsburg.

VfL Wolfsburg was ranked 6th in the 2018-19 season. Linglong invited 60 shop managers to watch a friendly game Wolfsburg had Frankfurt on May 24th as part of an exclusive trip.

In the future, Linglong Tire will actively participate in VfL Wolfsburg’s promotional activities. The two parties will also continue to work together to provide facilities and resources for the development of China’s youth football and strengthen cooperation with the women’s football team.