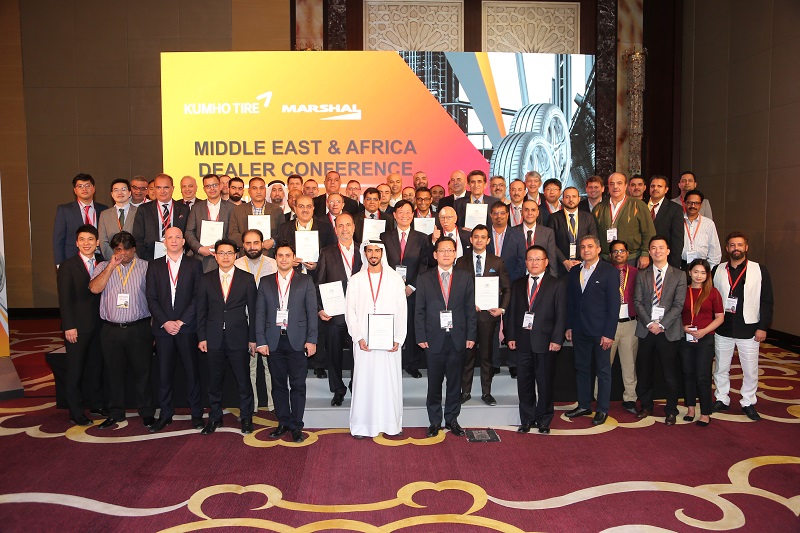 On December 5, 2017 Kumho Tire successfully held a dealers meet for distributors of the company’s products in Middle East and Africa. The high-profile event was held at the Conrad Hotel in Dubai and comprised two sessions – Product Seminar and Dealer Friendship Workshop. Over 50 dealers of Kumho and Marshal tyres participated in the event and used it as a platform to share their ideas and expertise.

At the entry to the hall where the meeting was held, an exhibition zone was set up to showcase ECSTA PS71 XRP, MU12 XRP, SOLUS HS41, HS11 tires and 10 other major products from Kumho and Marshal. Dietmar Damm, Product Intelligence Manager of Kumho European Technical Center (KETC) addressed the gathering to explain more about the specific products and the company’s strategies for the next year.

Kumho also used the first part of the conference to introduce Kumho Tire’s new board of directors and Middle East/Africa branch managers, including the new CEO Jong Ho Kim. He officially took over as the Chairman of Kumho Tire on December 1, 2017 after the board meeting confirming his appointment.

Jong Ho Kim joined Kumho Tire in 1976 and has served in progressively senior positions during his stint in the company like Senior Executive Vice President in Sales department, CEO of Asiana IDT and CEO of Kumho Tire from 2009 to 2012. The CEO gave Kumho and Marshal dealers trophies in appreciation of their support and promised to steer the company on a track of mutual growth.

The second session comprised a Dealer Friendship Workshop which began with a congratulatory speech by Yong-Sung Kim, Senior Vice President of Sales Planning & Overseas Sales. This was followed by speeches made by two dealers to represent the entire group- Kumho and Marshal dealer – Khaled Alayyan (Chairman of NAM) and Alireza Moaref (Managing Director of Varga Trading). They came onstage to share their experiences during their journey with Kumho Tire.

During dinner at the event hall, dealers continued to engage in active discussions while listening to live music played by Voice 3 band from Dubai. The conference definitely served as a good venue for dealers and company representatives to share information about the company, new products and sales strategies for the Middle East and Africa region and proved to be an outstanding success.