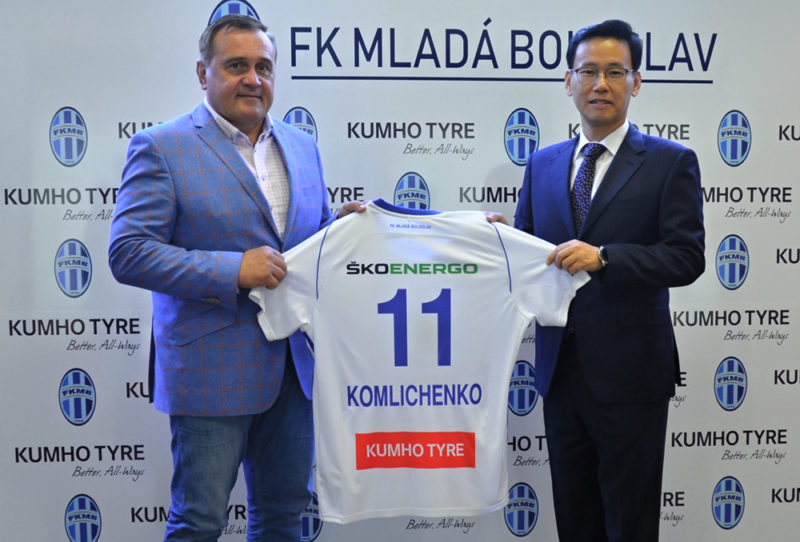 Kumho Tire has finalized a sponsorship deal with Czech football club FK Mlada Boleslav. Apart of the deal which is for a period of three years and will run until the 2021-22 season, Kumho will be the club’s official tire partner. In Europe, Kumho Tire presents itself as Kumho Tyre for all marketing purposes and will be using that same spelling for all branding related to this sponsorship.

As part of the sponsorship deal with FK Mlada Boleslav, the company’s name will be seen on all the uniforms worn by the players, with the Kumho Tyre logo embroidered on the back of their shirts and on the front of their shorts. The logo will also appear on match programs, the team’s website and on LED signage during home matches.

Kumho Tire decided to support the team hoping that the sponsorship will boost awareness of the brand in the Czech Republic and in Germany.

FK Mlada Boleslav is a renowned team that was established in 1902 and is one of the top teams in the Czech First League. The team has won the Czech Cup twice, in the 2010-11 and 2015-16 seasons.

Commenting on the partnership, said FK Mlada Boleslav president Josef Dufek said that the club found a true global partner in Kumho Tyre as the company’s values align well with both the sports goals and the business strategy of the club.

“In addition to England’s Tottenham Hotspur and Germany’s Bayer Leverkusen, I’m glad to sign a partnership with FK Mlada Boleslav, an elite football club in the Czech Republic,” said Kumho Tire CEO Jeon Dae-jin. “Through this partnership, we will contribute to Kumho Tire customers throughout the world and to FK Mlada Boleslav fans.”