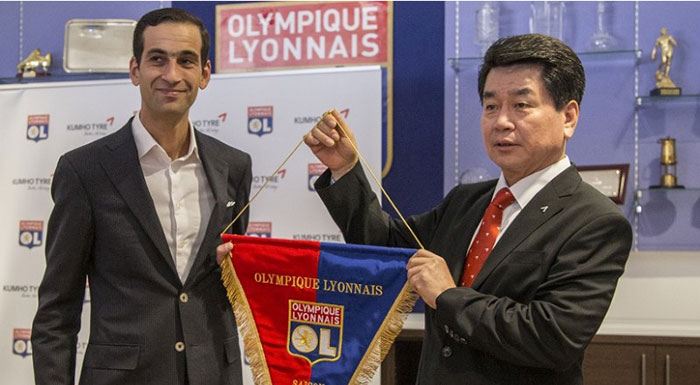 In addition to Kumho’s recent deal with the Tottenhaam Spurs, tire manufacturer, Kumho Tyrehas finalized a two-year partnership with Olympic Lyon, one of the leading football clubs in the French premier league and one of the teams which is slated to participate in the UEFA Champions League. The move is meant to increase Kumho’s visibility, especially for games that are played at the club’s home ground, the renowned Stade des Lumieres as well as on the club’s digital channels.

Speaking about the partnership, Jean-Michel Aulas, President of Olympique Lyon said that the collaboration would help both Kumho and Olympique Lyon to increase their international visibility in the near future. Joining hands with Kumho would help the club to expand its reach to fans in Asia and across the world.

Han-Seob Lee, President and CEO of Kumho, said at the signing ceremony: “We are very pleased to be working with Olympique Lyon, one of the most prestigious football clubs in Europe. This great new stadium is a great showcase for the Kumho. The partnership between Kumho Tyre and Olympique Lyon will help both brands to increase their international visibility.”

Kumho has a sponsorship strategy as part of which it focuses on supporting traditional clubs with strong regional foundations in Europe’s top leagues. This is meant to help the Korean tire manufacturer to promote brand awareness in Europe and throughout the world. Other football clubs across the world that Kumho sponsors include the Hamburger SV, Hertha BSC Berlin and FC Schalke 04 of the German Bundesliga, the Tottenham Hotspurs club in the English Premier League and the Atlético Madrid club belonging to the Spanish Primera Liga.