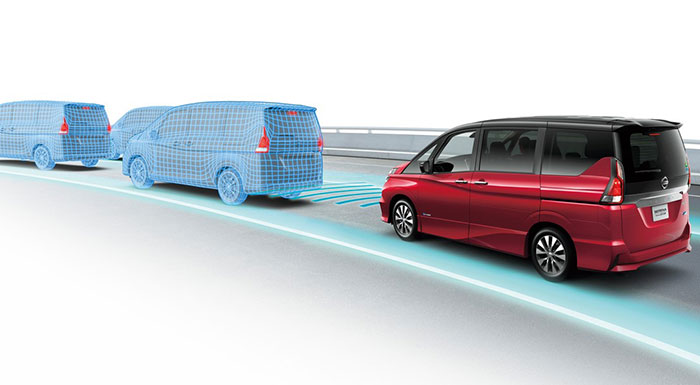 Nissan has announced that it will be debuting its ProPILOT technology in its new model Serena that is scheduled to hit the retail market in Japan in late August. The ProPilot autonomous drive technology will make highway driving a lot easier by offering motorists peace of mind and convenience. It is meant to be used in single-lane traffic and with its launch, Nissan becomes the first Japanese automaker to introduce fully automatic operation of the steering brake and accelerator, thus reducing the strain of long commutes in heavy traffic.

The Serena’s ProPilot system uses advanced image-processing technology to analyze road and traffic scenarios and steer the vehicle in a precise and natural manner. The system can be easily engaged and disengaged by using a switch on the steering wheel while another distinctive feature of the system is its easily understandable interface.

The ProPilot system controls the accelerator, brakes and steering based on informationsourced from mono camera that has advanced-image processing software. The ProPILOT camera easily recognizes lane markings and preceding vehicles in three-dimensional mode.

Once it is switched on, ProPILOT automatically controls the distance between the vehicle and the preceding vehicle, while keeping the vehicle cruising at a speed that has been preset by the driver (this can range from 30 to 100 km/h). The system also helps to keep the vehicle in the middle of the lane by using information regarding lane markings and thus directing the steering, even when taking corners.

In the event that the vehicle in front stops suddenly, the ProPILOT system automatically engages the brakes to bring the vehicle to a full stop. After this, the vehicle will remain in place even if the driver tries to apply the brake pedal. When driver wants the vehicle to return to drive mode, he can press the accelerator or touch the switch to activate ProPILOT.

Nissan’s aim is to make zero fatalities a reality with further research on vehicle intelligence and vehicle electrification. The company already has “Zero Emissions” and “Zero Fatalities” as its stated corporate goals. Under “Nissan Intelligent Mobility”, ProPILOT promotes safety and instills confidence in drivers, and it is part of “Nissan Intelligent Driving”.

After the launch of the Serena, ProPILOT will be gradually introduced in other models including the Qashqai in Europe in 2017. Nissan is also planning to unveil the technology in the China and U.S. In 2018, the Japanese manufacturer is planning to roll out a multi-lane autonomous driving technology that will facilitate automatic lane changes on highways. By 2020, Nissan hopes to move on to implementation of autonomous driving on urban roads and in intersections.

Nissan will focus on installing autonomous drive technology in the core models in each market, thus opening up a new era in the world of automobiles when it comes to safety and convenience.