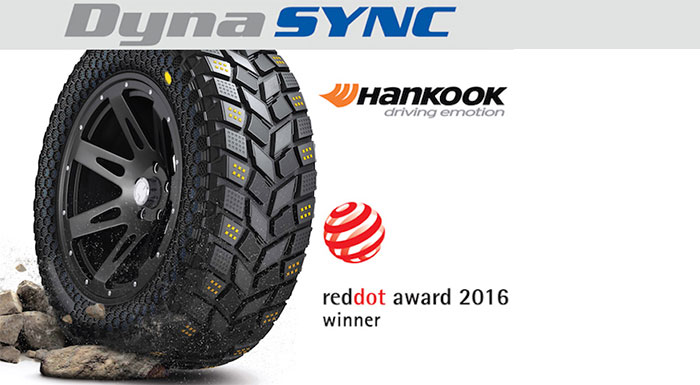 Hankook Tire has won the 2016 edition of the prestigious Red Dot design award for its DynaSync concept tire. Designed as an offroad tire in collaboration with shoe outsole manufacturer, Vibram, the concept tire has been specifically designed to tackle a wide range of off-road conditions.

Speaking about the award, Hankook’s chairman and CEO, Seung Hwa Suh said that receiving the award has increased Hankook Tire’s commitment and determination to use innovation and creative design to lead future driving.

The DynaSYNCtire uses Vibram’s Carrarmato lug design as part of its tread pattern to increase the tire’s traction in mountainous areas and the honeycomb pattern of the grooves minimizes the possibility of punctures and tire chips due to the prevalence of stones or gravel. It also contributes significantly to smooth and powerful handling and increases shock absorption. Another distinctive feature of the tire is that its sidewall incorporates a number of color compounds. This will allow motorists to match the color of the tires to the body color of the vehicle.

The Red Dot award for the DynaSYNC tire is the fourth such design award that Hankook Tire has received in 2016. Other design awards the Korean tire manufacturer has received include the iF Design Award in February, the Mercury Excellence Award and a Red Dot Design Award in the Produce Design category. “The continuous recognition by world’s renowned design awards highlights Hankook Tire’s global top tier technology and design leadership,” said Hankook in a statement.