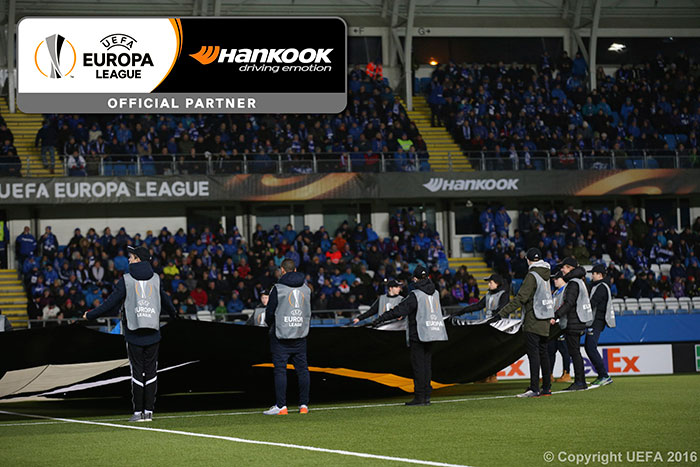 In its capacity as the official partner of the UEFA Europa League, leading tire manufacturer, Hankook Tire will be giving children a unique chance to take center stage at UEFA League matches. The company has become a patron of the “Centre Circle Carrier program”. As part of the program, children living in the cities which host the matches from the Round of 16 to the semi-finals of the UEFA Europa league will get a chance to become a part of the exciting pre-match ceremony.

For the matches in the league, which will be held in the cities of Manchester, Dortmund, Sevilla, London, and Istanbul, in every match 8 children in each city will get a chance to be part of the pre-match excitement and walk into the pitch, carrying the centre circle flag during the team-line ups. After the ceremony, participants will also be able to cheer for their favorite club and watch the match live inside the stadium. To support these children even more, the company is working with regional and local schools, charity and youth sports organizations to further extend this engagement during the upcoming cycles.

“The emotionality in soccer is a perfect match to our company motto ‘Driving Emotion”, explains Gang Seung Lee, Vice President Marketing & Sales Hankook Tire Europe. “We are pleased to be supporting the UEFA Europa League, one of the most challenging and highly emotive competitions in international football whilst sharing excitement with children across Europe.”

The Center Circle program is a fantastic opportunity for Hankook to share the excitement of football with its youngest fans. In 2015, the tire maker announced the renewal of its sponsorship contract with the UEFA Europa League, Europe’s largest professional club football competition. It will continue to be an official partner to the prestigious club competition for another three years until the end of the 2017/18 season.