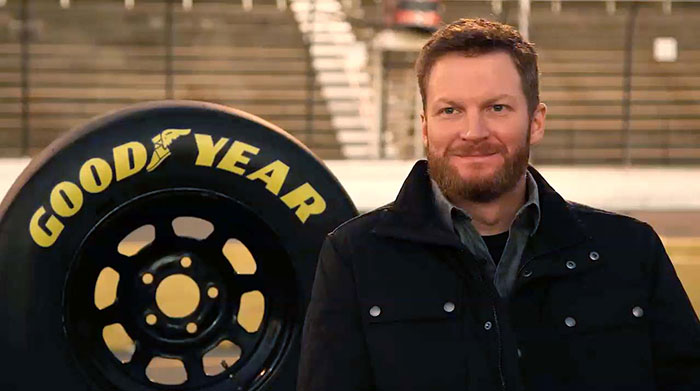 Goodyear Tire & Rubber Co. has chosen to expand its partnership with celebrated racer, Dale Earnhardt Jr’s. He will be the company’s spokesperson in a new series of print, broadcast and digital ads for promoting Goodyear products.

Commenting on the partnership, Dale Eberhardt Jr said that he has tremendous confidence in Goodyear as he uses Goodyear tires for both his own personal car and on the track. The new campaign is an extension of this partnership.

Earnhardt Jr. is one of the most popular drivers on the NASCAR circuit and has accomplished a lot during his 13 year stint in racing. He has used Goodyear tires to race to his first victory in the 2000 edition of the NASCAR Sprint Cup victory and in the Daytona 500 races in 2004 and 2014.

According to Goodyear, Earnhardt was chosen as the face of the brand on the strength of his personal connection with the brand.

The television commercial depicts Eberhardt speaking from the heart about tradition, pride and the value of hard work. He emphasizes the basic premise of Goodyear’s involvement in NASCAR – the process of continuous learning that takes is achieved through all of the drivers and the contribution of the motorsports to the company’s ability to deliver superior performing tires both on and off the track.

Goodyear says it will the creative campaign will be enhanced with a robust media plan and social media support.

“We are pleased to work with one of the premier experts in the sport to showcase Goodyear in a compelling and engaging way,” said Seth Klugherz, Goodyear’s director of marketing. “Dale Jr. is a true icon and superior brand ambassador.”