Home News Tires Cimcorp to Set up Office in India 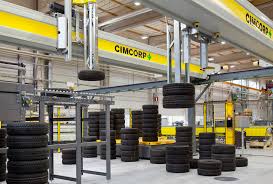 Cimcorp to Set up Office in India

Cimcorp, the leading manufacturer of tire handling solutions has announced plans to set up a new office in Chennai, India. The office will become operational from June and will allow Cimcorp to cater better to the needs of its customers in the Indian market.

Commenting on this decision, Masatoshi Wakabayashi, the company’s CEO said that it was logical step to expand the company’s presence into India. The new office in Chennai will make it easier for Cimcorp to meet the needs of its present and potential customers in the Indian market. The office will also function as the company’s customer support location for Indian clients, and will play an important role in expanding the comprehensive service network Cimcorp provides in partnership with its parent company, Murata Machinery Ltd.

Cimcorp decided to proceed with the establishment of the office in Chennai to help it meet the increasing demand for automation in India’s tire industry. The move will further reinforce the company’s position as a leader in material flow automation for tire manufacturing.

In order to further strengthen its position in the region, Cimcorp has appointed Pekka Natri as its head of operations in India. Natri is a veteran in the field of international business, and has previously worked in the Indian market – initially during the 1990s and then for a longer stint in 2007-2011.

Commenting on his new position, Natri said that he was exited to take up his new role and to help Cimcorp to reinforce its presence in Asia. Natri was tasked with finding the perfect location that would be near to Cimcorp’s customers, and with collaborating with local recruitment specialists to find the best talent for the company’s Indian team.

“This is a tremendous opportunity for Cimcorp’s growth and for me personally. I am confident that, with the competence and professionalism of our Indian personnel, we can support our customers to enable them to focus on their core business even better than before,” Natri said.

Wakabayashi said that Pekka Natri demonstrated strong leadership and expertise, and he expressed his confidence that the company’s investment in the new office would provide an immediate, positive impact on both Cimcorp’s customers and its employees.