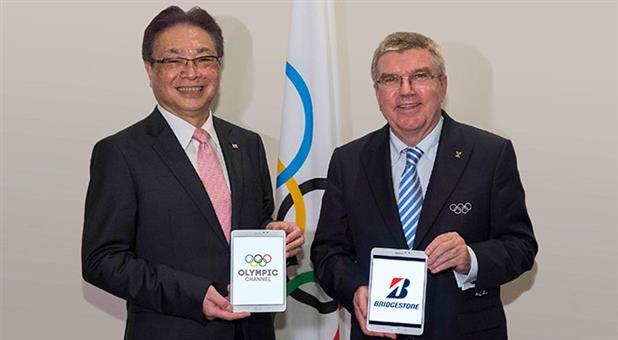 Bridgestone has been named as the first Founding Partner of a new digital platform that will have content that is exclusively dedicated to the Olympic Movement. The Japanese tire manufacturer signed an agreement to this effect recently with the International Olympic Committee (IOC). The platform will give sports fans the opportunity to get sports updates and Olympic news all the year round and will be launched on a global basis on August 21 after the closing ceremony of the Rio Olympics 2016, which are currently going on. Bridgestone has signed up to be a partner of the platform for a period of four years.

IOC president Thomas Bach expressed his delight to welcome Bridgestone onboard as founding partner of the Olympic Channel. The tire manufacturer had signed an agreement to become a Worldwide TOP Partner back in 2014.

Masaaki Tsuya, chief executive officer and representative executive officer at Bridgestone Corporation said that this is a very exciting time for Bridgestone as this becoming a TOP sponsor marked first truly global marketing agreement in the company’s history. The Olympic Games Rio 2016, was the company’s first as a Worldwide TOP Partner and now the tire manufacturer is also the first Founding Partner of the Olympic Channel. He added that the Olympic Movement has universal appeal and affirmed the company’s longstanding support for sport and its belief that the core principles of the Olympic movement should be celebrated on a daily basis.

Bridgestone’s agreement to become a part of the TOP (The Olympic Partner) program was sined in June 2014 and is for a period of 10 years, extending to the Olympic Games Tokyo 2020, which will be held in the company’s home city. Bridgestone strongly believes that its support of the Olympic Channel will serve as a means to reach a worldwide audience even after the Olympic Games are over, 365 days a year.

As a Founding Partner, the company will be the presenting partner of the Olympic Channel’s “Against All Odds”, an eight-episode documentary series that seeks to highlight the Olympic spirit and follows the stories of eight athletes, with each half-hour episode focusing on one athlete, detailing the struggles they have faced in their bid to become champions and the determination they used to tackle the obstacles they have encountered. The first episode in the series will premiere on 21 August.