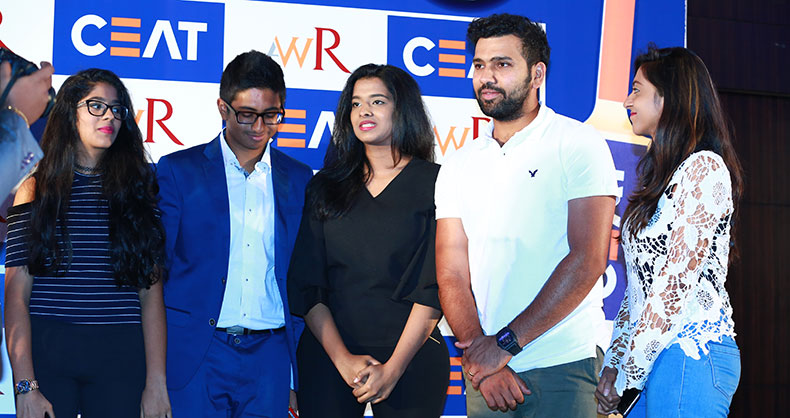 CEAT customers in the UAE were in for a treat when Ceat’s authorized distributor in the UAE, AWRostamani Trading Co LLC organized the CEAT IPL Campaign closing ceremony on September  7,  2016 at the LeMeridien Airport Hotel in Dubai.  Ten lucky customers who emerged as the winners of a scratch and win campaign conducted over a period of four months from May onwards got a chance to meet cricketing star, Rohit Sharma and get cricket gear. The campaign was conducted with the approval of the Dubai Economic Department and the event was also attended by the company’s 10 best performing dealers for Ceat tires.

The event was a gala one which began with a welcome to the cricket star by Pawan Rana, General Manager of CEAT Middle East. Luigi Rubinacci, Director of Strategic Ventures went on to give the key note message for the evening and this was followed by an interactive session between Rohit and the guests during which he spoke about his long journey from the time he was 10 years old to gain his current status as a cricketing star and a valued member of the Indian cricket team. He shared fond memories of the joy he felt when he was chosen to be a part of his school team and the even greater joy he felt when he was chosen for the national team at 20, struggling with poor form when he suffered a fracture to his finger and the hours spent polishing his batting skills.

During his talk, Rohit advised budding cricketers to work hard with all their determination to achieve their dreams. He also added that there are no shortcuts to Success. He reminisced about being an ardent fan of Sachin Tendulkar when he was a boy and then achieving his dreams by having Sachin play under his captaincy for the Mumbai Indians during the IPL season.

The 10 lucky winners and 10 top performers received bats which were autographed by Rohit Sharma had opportunities to take selfies with the batting great. Key executives from the AWRostamani Group and  the Marketing Team from CEAT Limited attended the high profile event.

CEAT is an Indian tire brand from India with a history going back to 1958. The company makes tires at three state of the art factories spread across India. The tire maker exports its tires to over 115 countries and has over 3500 dealers worldwide. CEAT’s association with AWR began in 2012 with regard to commercial tires and in 2014 with respect to passenger tyres. Even in a highly competitive market like the UAE, in a short span of 2 years over 107000 GrippLN tires from CEAT have been sold and this is a really commendable achievement.

AWR is one of the largest automotive business houses in UAE and has a heritage of half a century in the automotive business. Both AWR and CEAT being strong brands in their respective fields, CEAT is bound to make a mark in the UAE automotive market in the coming years.