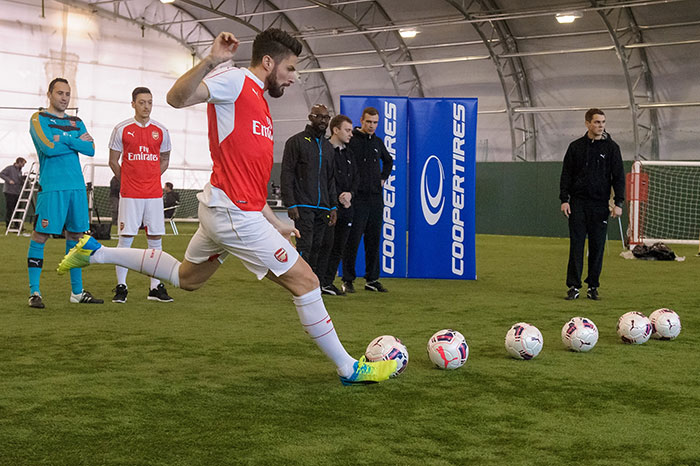 Cooper Tire Europe is back with another precision challenge for players from the popular English football team, Arsenal, with which the renowned American tire company has a partnership. Cooper is Arsenal’s official tire partner and has already held two tests to test the accuracy of the Arsenal strikers. The videos of these tests have proved to be highly popular on social media platforms.

Arsenal striker Olivier Giroud, midfielder Mesut Ozil and goalkeeper David Ospina compete fiercely with three FIA World Rallycross Championship drivers in the third part of this series, https://www.youtube.com/watch?v=oyLh6KRwWTM. They then go on to face a swinging pendulum from which Cooper Zeon 4XS Sport tires are suspended. The footballers have to strike a ball through Cooper’s latest SUV performance tire, Cooper Zeon 4XS Sport tire to score a goal and win the challenge.

In the video, it is midfielder Ozil who emerges as the winner along with ace rallycross driver Janis Baumanis. Giroud and Anton Marklund jointly finish second along with Ospina and Reinis Nitiss. Rallycross champion, Marklund proves he is just as good when it comes to football by getting a ball through the tires suspended from the pendulum.

Cooper Tire Europe Marketing Communications Manager, Sarah McRoberts, said that the video was a fun way to showcase the high level of skills of the sportspersons Cooper is associated with. The company’s showcased Cooper’s partnership with Arsenal as well as its association with the World Rallycross Championship. Both on the soccer field and in motorsports, the Arsenal players and the World Rallycross drivers need to display outstanding precision.

Cooper Tire Europe is the sole supplier of rubber to the prestigious World Rallycross Championship, which combines both circuit racing and rallying to attract the interest of millions of fans spread across the world. Famous participants include X-Games legend Ken Block, ex-World Rally Champion Petter Solberg, and nine-time World Rally Champion, Sebastien Loeb.

The company also has a multi-year sponsorship deal with Arsenal, currently in its second season. The partnership reflects the values that Cooper and Arsenal share – a passion for performance, and drive for success.