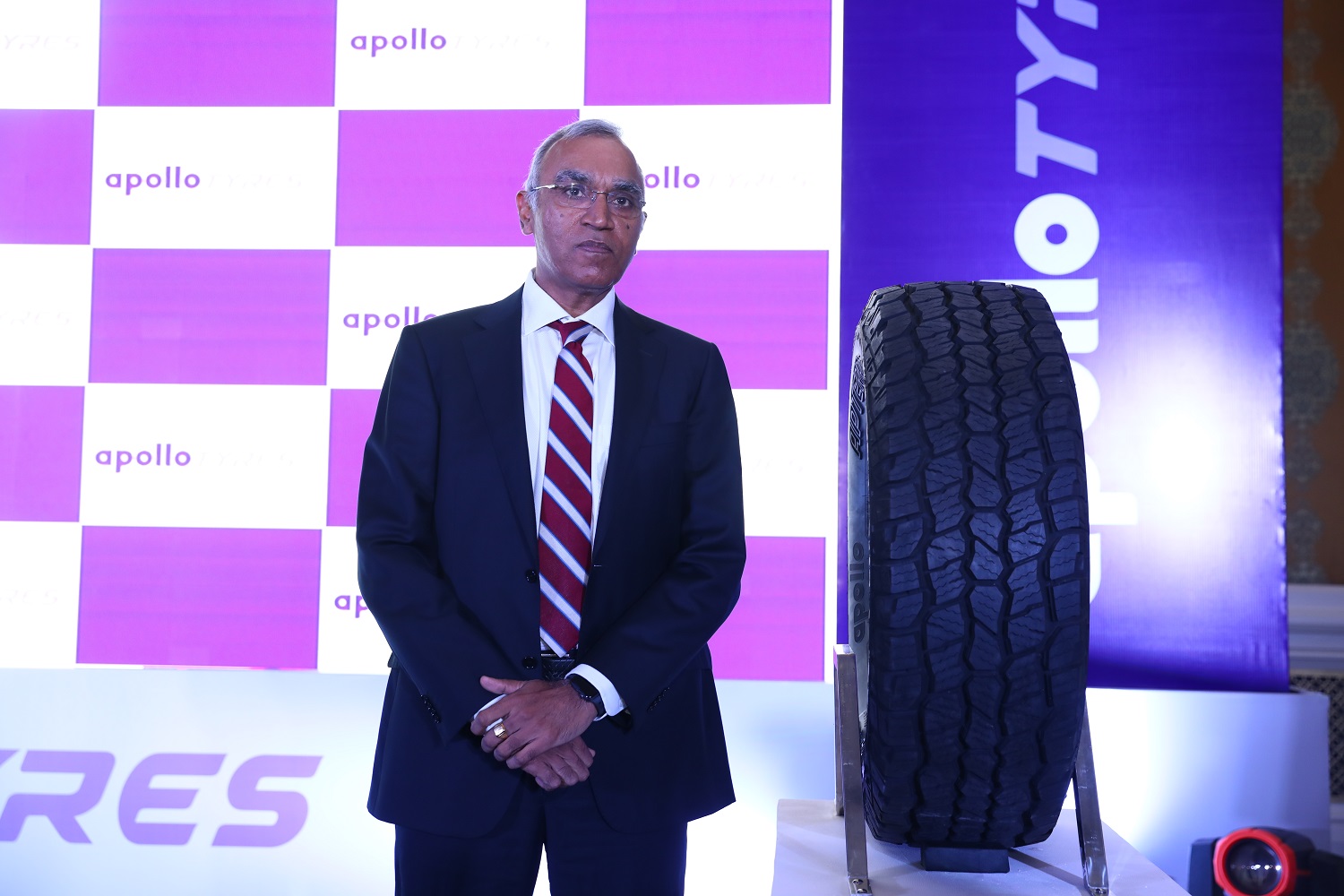 Apollo Tyres has revealed plans to focus more on tires for the SUV segment in the Indian market. The company recently launched its new range of all-terrain SUV tires called Apollo Apterra AT2, for those who are keen on off-road adventures. This all-terrain tire will complement Apollo’s current range of Apterra tires including specialized Highway Luxury (HL), Highway Terrain (HT), High Performance (HP) and the All Terrain (AT) tires that are meant for SUVs. The new tire was launched by Satish Sharma, President, Asia Pacific, Middle East & Africa (APMEA) at an event that was attended by members of the media, Apollo’s business partners and members of its Sales/Marketing team.

The new Apollo Apterra AT2 tire was designed and developed through the joint efforts of Apollo’s team at two Global R&D Centres — in Enschede, the Netherlands and in Chennai, India. The cross-functional team included employees drawn from R&D, Manufacturing, Service, Business Quality and Marketing.
The new Apterra AT2 will be manufactured at Apollo’s factory in Vadodara, Gujarat. The tire delivers impressive levels of On & Off road traction and durability and has been comprehensively tested in different terrains across South Africa, the US, Middle East, India and SE Asia prior to its launch.

Apollo Tyres is now seeking on leveraging the growing demand for all-terrain tires, which in the Indian market alone is approximately 15,000 tires/month. The company will initially launch the tire in 8 sizes and it is meant for use in models like the Range Rover Sport , Evoque , Velar , Ford Endeavour, Toyota Fortuner, Mitsubishi Pajero, Mahindra Scorpio, XUV 500, Tata Hexa, Isuzu MU7, V Cross and others. An additional 6 sizes of Apollo Apterra AT2 will be launched in the second phase of its launch to cover more than 90 percent of the all-terrain vehicle market.

Commenting on the launch, Satish Sharma, President, Asia Pacific, Middle East & Africa (APMEA), Apollo Tyres Ltd said that with the SUV segment growing faster than the passenger car segment, the company was sharpening its focus on the SUV segment in India by making specialized tires meant for different terrains and applications. He said that the tire’s excellent performance in tests and the global efforts involved in the development of the Apollo Apterra AT2, gave the company confidence that the tire would set a new benchmark in the all-terrain tire space, and would further propel its leadership in the SUV segment.

The Apollo Apterra AT2 tire is equipped to tackle both on-road and off-road obstacles and is designed to outperform on all terrains. It has a patented tread design which features 3D interlocking sipes, tread with DPF technology and shoulder design incorporating SAW-Tooth technology. The sawtooth technology provides a higher level of traction. The tire is highly durable and impact resistant thanks to its triplex casing and high tensile steel belts. Its herringbone grooves ensure there is efficient water drainage on wet roads and provide motorists with better control during off-roading. The tire’s wider tread width provides it with greater stability during cornering. Though the tire is an aggressive product for On/Off application, it still conforms to global regulation especially for NVH.

Apollo Tyres has also curated #BadRoadBuddies, a community that will serve as a platform for off-road enthusiasts to bond and share details regarding the unexplored beauty of undiscovered spots across India. The community includes off-roaders who are keen on tackling some of the harshest roads in the country in a bid to get breathtaking views and a lifetime worth of experiences.