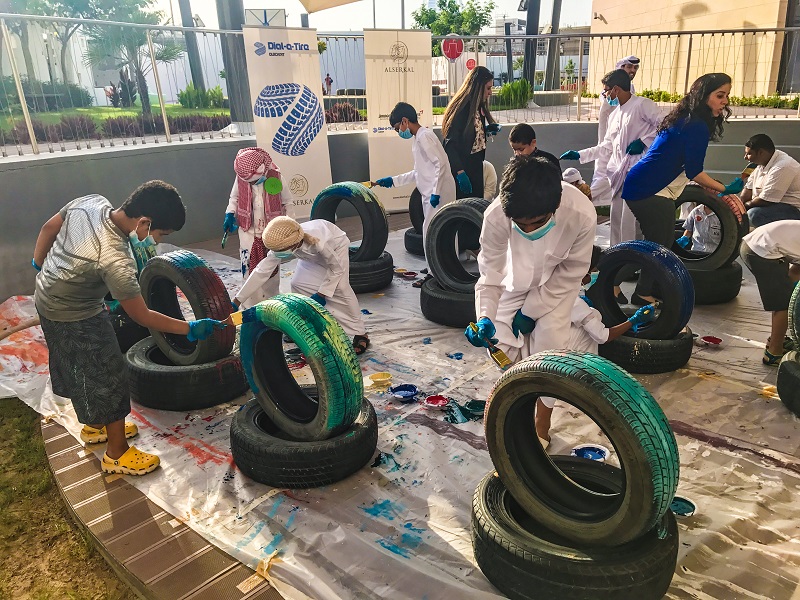 Heaps of used tyres can be an eyesore and there are only a few ways to recycle tyres once their life on the roads is over. Dial-A-Tire, a subsidiary of Alserkal Automotive recently used art as a means to teach children, especially those with special needs about the importance of recycling while giving them a means to express themselves creatively.

Called ‘Tires for Smiles’, the concept involved allowing children to paint used tyres with their favourite colours. Dial-A-Tire collaborated with the UAE Down Syndrome Association to conduct the initiative and provided underprivileged and special needs children from across the UAE with paintbrushes so they could daub used tyres with their very own designs.

Commenting on the campaign, Babar Naseem, Marketing & C.S.R Manager at Nasser Bin Abdullatif Alserkal Est. said that it was amazing to watch the campaign evolve from the concept stage. The idea was to come up with an idea that was different and engaging.

He said that the Alserkal family is closely connected with both recycling and art and hence the concept proved to be the perfect means to combine both. The used tires which were used for the project were now reincarnated as flower pots, seating cushions, and as accessories for play areas.

Naseem added that children with special needs are known to be artistic and the campaign provided them with a platform to express their artistic talents. He said, “Under the vision of our Vice Chairman Mr. Ahmad Bin Eisa Alserkal, we will continue to organise similar initiatives to add as many smiles as we can across the UAE.”

Dial-A-Tire has ambitious plans to take the Tires for Smiles concept nationwide and engage other schools and children’s groups around the UAE. In addition to art, Alserkal, is working with Al Jalila Cultural Centre for Children on the development of an automotive life skills program that will equip young children with basic skills when it comes to car mechanics. This is something that will definitely be useful to them in the future.