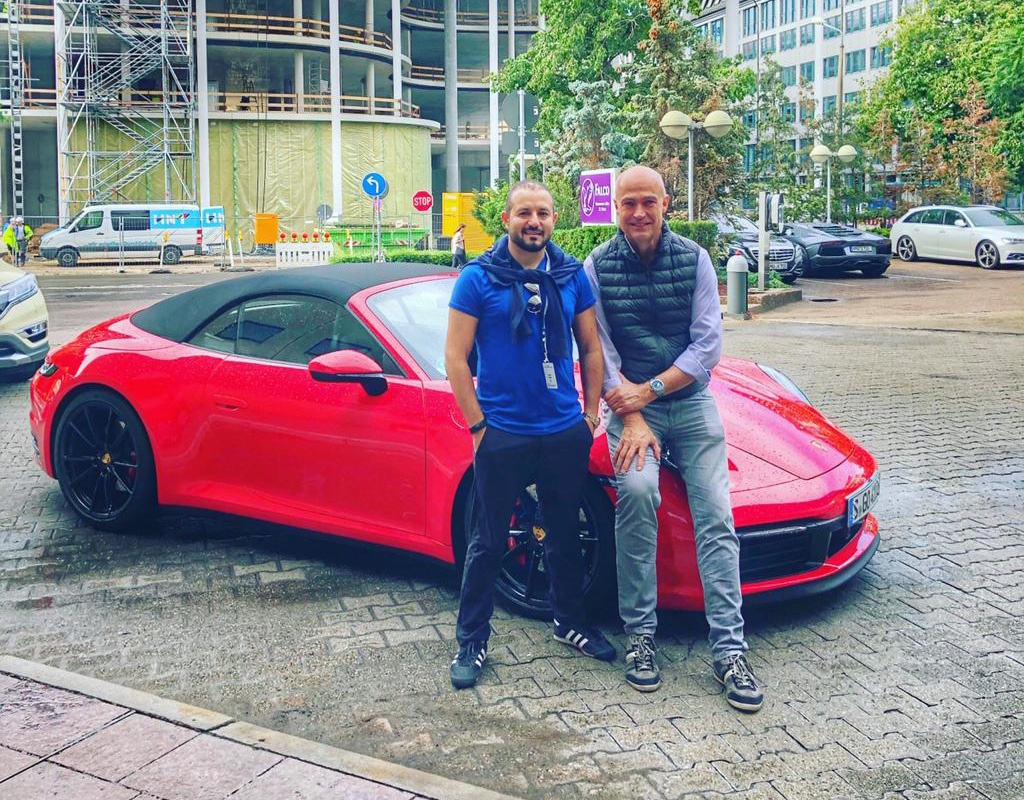 Porsche used a road trip from Leipzig to Stuttgart to showcase the looks and capabilities of the new Carrera and I was fortunate to be a member of the contingent that made the trip. The experience covered not just the road aspect but also included stints on the track at the Porsche Leipzig Experience Centre in Leipzig. The racetrack replicates eleven world-famous bends that have been taken from racetracks across the globe, including Monaco and the Nürburgring. Both these experiences served to highlight the fact that the new Porsche Carrera is definitely a model that belongs in the future.

The Porsche 911 Carrera is now in its eighth generation and continues to be an iconic car while sporting the latest design and performance features. It still retains some elements that have made the model so popular, while featuring an enhanced muscular look, a more powerful engine and a wide array of new technical features.

The rear-wheel drive 911 Carrera S and the all-wheel drive 911 Carrera 4S, is available in Coupé and Cabriolet variants. The journey from Leipzig to Stuttgart combined urban, scenic and highway routes. With no speed limit on Germany’s famous autobahn, there was a brief spell where I experienced the thrill of reaching the speed of 310 kilometers per hour and I still felt I had not tested the limits of the car. As someone who owns a 2013 Porsche Carrera, this trip was particularly relevant for me. The surprise guest at the event, Porsche Works Driver, Timo Bernhard, who had recently celebrated his 20- year milestone as a member of the Porsche Motorsport team, was present at the racetrack to demonstrate the outstanding performance of the new 911.

Speaking during the event, Dr Manfred Bräunl, Chief Executive Officer at Porsche Middle East and Africa FZE, called the new 911 Porsche’s best 911 ever. The new model is positioned as a more powerful, more emotional, and more efficient version while offering several advanced features. According to him, the main purpose of holding such an event was to highlight the versatility of Porsche’s new 911 Carrera range, that performs equally well on both the racetrack and on the road. Though a true sports car, when driven on the road, it does offer excellent driving comfort.

Timo Bernhard, Porsche Works Driver said that he admired the manner in which Porsche used its  learnings from a competitive motorsport environment to make road-legal models thus giving every  Porsche owner the privilege of owning a sports car which is truly a joy to drive in different terrains.

In terms of the external design, the new model is more muscular, with significantly wider wheel housings arch over the 20-inch front wheels and 21-inch rear wheels. The rear end now extends in a single line and is the same width across all models with a seamless, elegant light strip and a variable position rear spoiler. I was particularly impressed by this as it makes the car sportier and highlights the slimline center section. The doors have electrical pop-out handles while the prominent recess in the bonnet is evocative of the first 911 generations. All models feature a rear significantly wider, variable-position rear spoiler and the seamless, elegant light strip. Other than the front and rear sections, the outer shell is made entirely from aluminum. The new optional LED matrix headlights comprising 84 individual LEDs with PDLS Plus generate a light beam that offers the same range and intensity as laser light.

While my 2013 Carrera was one of the last models to have a naturally aspirated six-cylinder engine, both the 911 Carrera S and 911 Carrera 4S Coupé now derive an output of 450 hp from the turbocharged flat-six engine that is used in both models. This represents an increase of 30 hp when compared with the previous generation. While the rear-wheel drive 911 Carrera S goes from 0-100 km/hr in 3.7 seconds, the 911 Carrera 4S, which has allwheel drive is slightly faster, requiring just 3.6 seconds.. The optional Sport Chrono Package reduces this sprint by a further 0.2 seconds. The engine is paired with the newly developed eight-speed Porsche Doppelkupplung (PDK) dual-clutch transmission. While the top speed for the 911 Carrera S is 308 km/h, it is 306 km/h for the all-wheel drive version.

The interiors have been thoroughly revamped with the dashboard having clear and straight lines. The instrument panel is recessed like in the 911 models of the 1970s and has an analog dial to complete the effect. The two thin, frameless displays supply information to the driver while the center screen of the Porsche Communication Management (PCM) is now 10.9 inches further enhancing comfort levels for the driver and passengers considerably. There is a compact switch unit with five buttons providing the driver with direct access to important vehicle functions. The seats are also more comfortable.

The use of a mixed size tire configuration, with 20-inch wheels on the front axle and 21-inch wheels on the rear axle improves driving dynamics. The tires on the rear drive-axle are significantly wider than on the front wheels, lending greater stability, traction and balance while reducing understeer and oversteer to improve safety. The refined chassis design is completed by the next generation of Porsche Active Suspension Management (PASM), which has been extensively enhanced for the new 911.The braking performance has improved significantly and the brakes are sharper and more precise.

Porsche has used innovative technology to get a coupé-like curvature for the 911 Carrera S and 4S Cabriolet and this also offers aerodynamic benefits. The lighter hydraulic roof drive makes it possible for the convertible top to be opened or closed in around 12 seconds at speeds up to 50 km/h. There is also an integrated, electrically operated wind deflector for higher levels of comfort in the 911 Carrera Cabriolet at higher speeds.

Another feature that impressed me was Porsche’s world first Wet mode, which is included as a standard feature. This automatically senses water on the road through sensors right above the tires, preconditions the control systems accordingly and warns the driver. This is either done automatically or the driver can opt to set up the vehicle for a safer drive by using the mode switch on the steering wheel (Sport Chrono Package).

With its ability to go seamlessly from track to road, the stylish new design, outstanding levels of ride comfort and advanced technical features, this new Carrera is definitely a winner.