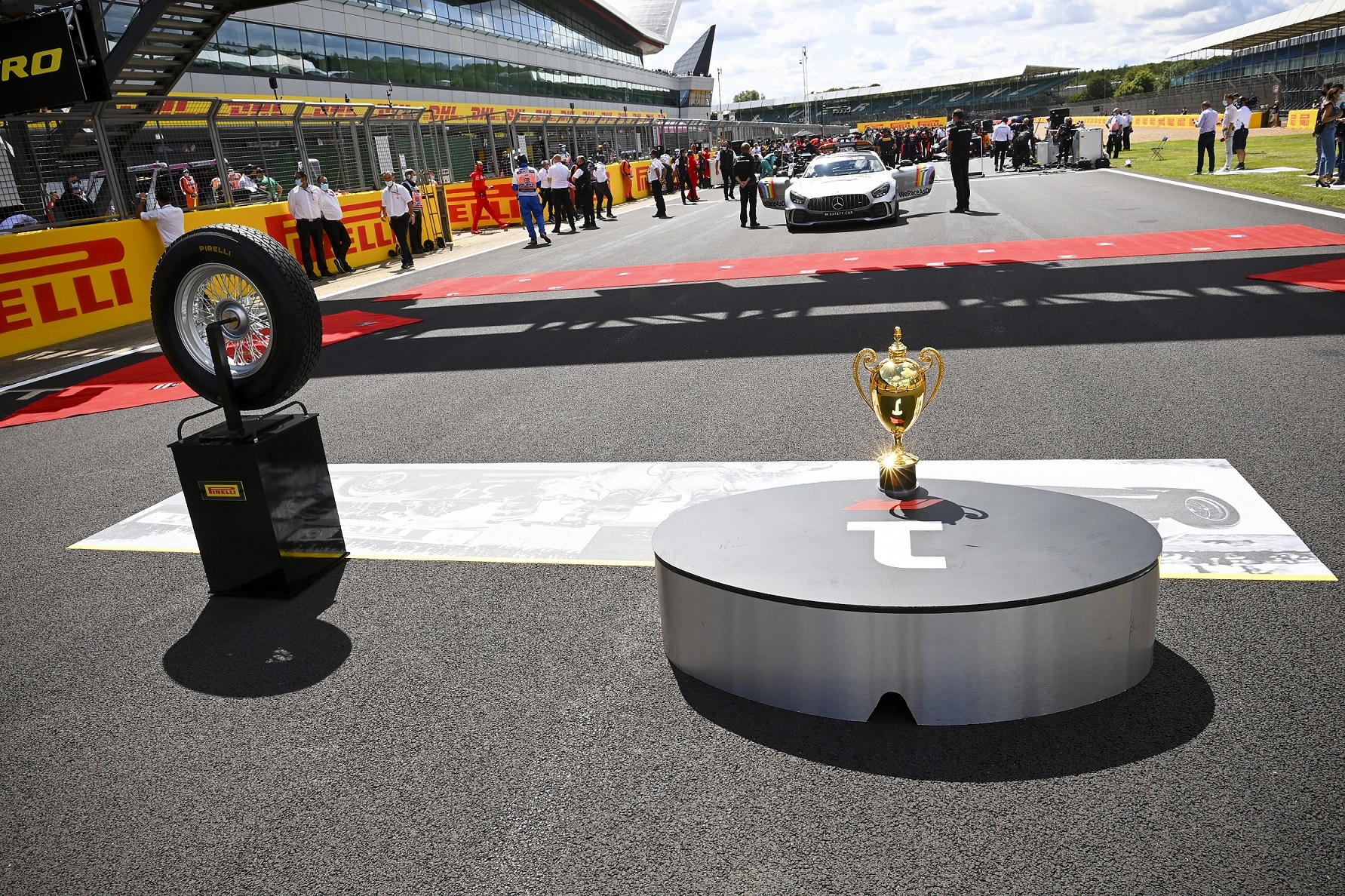 SILVERSTONE, UNITED KINGDOM - AUGUST 02: Trophy and Stella Bianca on the grid during the British GP at Silverstone on Sunday August 02, 2020 in Northamptonshire, United Kingdom. (Photo by Mark Sutton / LAT Images)

Pirelli, the world-leading tyre manufacturer and global symbol of Italian industrial excellence, took on the track during the one-off Formula One motor race in celebration of the Grand Prix 70th Anniversary this week. The back to back races took place at the Silverstone Circuit in the United Kingdom.

In Italian, ‘Stella Bianca’ means ‘white star’. But in the world of tyres, Stella Bianca is synonymous with Pirelli – and specifically, the golden age of motor racing. Back in 1950, when the Formula 1 world championship was new, and Giuseppe Farina won the first race – a birthday being celebrated during the second weekend of August at Silverstone’s 70th Anniversary Grand Prix – the tyre on his Alfa Romeo was a Pirelli Stella Bianca. There was even a little white star on the sidewall to distinguish it: a motif shared with the road-going tyres that carried the same name. Like Alfa Romeo itself in those early years, Pirelli tyres were dominant throughout the first seasons of Formula 1: also winning with Ferrari and Maserati to infuse a deeply Italian flavour into the beginnings of the world’s premier motorsport category. To this day, Alfa Romeo and Pirelli is the only combination to have been around from the very beginning.

Pirelli’s Formula 1 slick tyres of the modern era are called P Zero, while Cinturato is the name of the wet weather tyres. Now though – 70 years after it first raced in Formula 1 at Silverstone – the famous Stella Bianca name is back at the ‘home of British motorsport’. Both on the track as well as the road, exemplifying the symbiosis that has always inextricably linked Pirelli’s road-going products to the tyres that it makes for the world’s circuits.

Not only is the Stella Bianca tyre one of the stars of Silverstone, but it’s also still very much present on the road. Two years ago, a road-going version of the Stella Bianca tyre was relaunched: part of the Pirelli Collezione family of vintage tyres, which combine classic looks with modern technology. Pirelli’s Collezione range, which is expanding all the time, now equips a huge variety of classic cars, from post-war legends to modern classics of the 1990s.

These tyres are designed to help drivers of classic cars enjoy their vehicles in exactly the same way that the original owners once did, back when they were new. All the Collezione tyres are produced in limited quantities, just as is the case for Pirelli’s motorsport tyres – and in fact, the latest Stella Bianca tyres are made in the same specialised factory as many of the tyres destined for competition use. What makes the Stella Bianca stand out is that it’s currently the only tyre Pirelli makes using a traditional cross-ply construction, after years of making radial tyres. And some new sizes will be launched later in the year, opening up the Stella Bianca to even more motoring enthusiasts.

Unlike the 1950s, the top Formula 1 stars won’t be racing on the iconic Stella Bianca this time: only admiring it from a distance. But they’ll still be able to appreciate the rich history that helped make their sport into the truly global spectacle that it is today. With Pirelli at the heart of it, right from the very beginning.