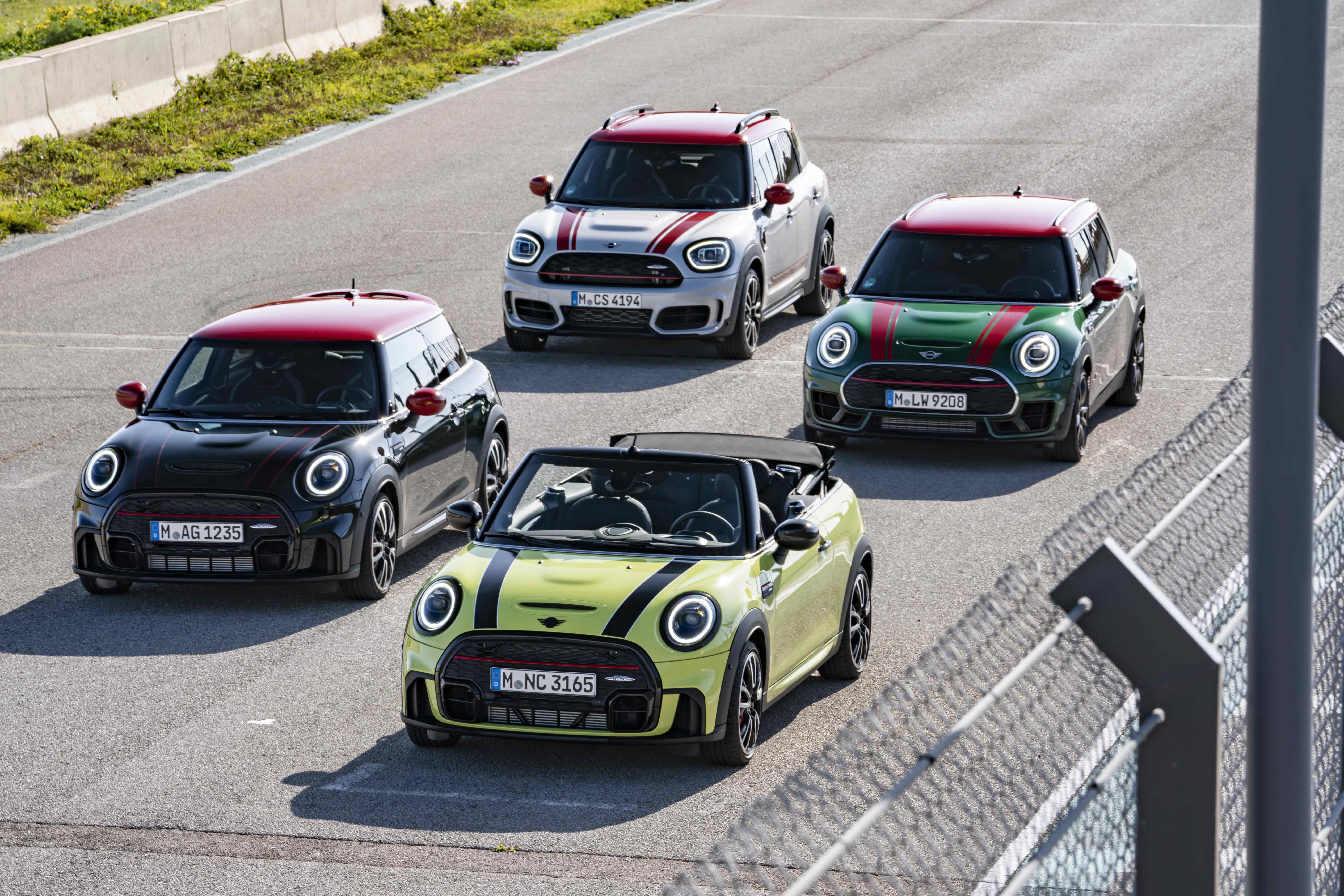 When characteristic driving pleasure rises to a thrilling race feeling, the John Cooper Works logo immediately comes into focus alongside the unmistakable design features of the British premium brand MINI. Each John Cooper Works model combines individual style with challenging performance in its own unique way. The current starting line- up of top athletes includes models from the small car and premium compact segments. Each of them guarantees extreme driving pleasure and fascinating charisma through drive and chassis technology derived directly from motorsport as well as specific design features in the exterior and interior.

The connection between MINI and John Cooper Works is based on a decades-long tradition, joint successes in racing and a shared awareness of driving pleasure, individuality and premium quality. Six decades ago, the sports car designer John Cooper paved the way for the classic Mini on the race tracks and rally tracks. Three overall victories at the Monte Carlo Rally helped the British small car to legendary status as early as the 1960s. In the more recent past, the sporting career was marked above all by the six overall successes for MINI in the Dakar Rally.

With the current John Cooper Works models, the passion for top performance can also be experienced in everyday traffic. Their technology, developed with racing know-how, and their performance- oriented appearance secure them an exceptional position in their respective competitive environment. As an original in the premium segment of small cars, the MINI John Cooper Works (fuel consumption combined: 7.1 – 6.8 l/100 km according to WLTP, 7.1 – 6.9 l/100 km according to NEDC; CO2 emissions combined: 161 – 155 g/km according to WLTP, 163 – 158 g/km according to NEDC) embodies the classic three- door body concept in a particularly sporty form.

Exclusive open-air pleasure creates an additional appeal in the MINI John Cooper Works Convertible (fuel consumption combined: 7.4 – 7.1 l/100 km according to WLTP, 7.4 – 7.1 l/100 km according to NEDC; CO2 emissions combined: 167 – 161 g/km according to WLTP, 169 – 163 g/km according to NEDC). Both models now enter the race with fresh design accents. The most important changes to the exterior include the reduced surface design at the front, the hexagonal radiator grille, which has gained in size and presence, new side scuttles and a clearly designed rear apron, in whose lower area a particularly striking diffuser now frames the two tailpipes of the sports exhaust system.

A 2.0-litre four-cylinder engine with MINI TwinPower Turbo technology ensures spirited power delivery in both models. It generates a maximum output of 170 kW/231 hp and a maximum torque of 320 Nm. The drive torque is transmitted to the front wheels via a 6-speed manual transmission as standard and an 8-speed Steptronic Sport transmission as an option. The MINI John Cooper Works needs 6.3 seconds (automatic: 6.1 seconds) to sprint from a standstill to 100 km/h. Its top speed is 246 km/h. Its top speed is 246 km/h. The MINI John Cooper Works Convertible accelerates to 100 km/h in 6.6 seconds (automatic: 6.5 seconds) and reaches a top speed of 242 km/h (automatic: 241 km/h).

With their chassis technology precisely tuned to the performance characteristics of the engine, the two top sports cars enable an intense performance experience. A sports brake system developed in cooperation with the specialist manufacturer Brembo is just as much part of the standard equipment as the 17-inch John Cooper Works light-alloy wheels. The latest version of the Adaptive Suspension is now available as an option, which with its new frequency-selective damper technology ensures an optimised balance between sportiness and ride comfort.

The most important thing they have in common is an irresistible forward thrust that comes from the power of a 2.0-litre four-cylinder engine with MINI TwinPower Turbo technology. The drive unit develops a maximum output of 225 kW/306 hp and a maximum torque of 450 Nm. It is combined with an 8-speed Steptronic Sport transmission as standard. In both models, the ALL4 all-wheel drive system takes on the task of distributing the ample drive torque between the front and rear wheels precisely and as required in every driving situation. The system is supported by the mechanical differential lock integrated into the automatic transmission. It acts as a transverse lock to reduce the speed compensation between the front wheels. With a locking effect of up to 39 percent, it promotes traction on unpaved terrain or in adverse weather conditions as well as driving dynamics during sporty cornering.

A Brembo sports brake system with four-piston fixed calliper disc brakes on the front axle ensures superior deceleration performance even for the top athletes in the compact segment. Another component of the standard equipment are the 18-inch

In all models, a new operating system offers optimised options for quick and intuitive control of vehicle functions, audio programme, communication, navigation and apps. Live widgets on the 8.8-inch touch display of the central instrument now serve to activate the desired menu item, which can be selected with a swiping motion similar to that on a smartphone.

Two colour worlds are now available for the graphic display on the central instrument and the multifunctional instrument display on the steering column. The “Lounge” and “Sport” modes offer relaxing blue and turquoise tones and an animating combination of red and anthracite, respectively, which can also be linked to the corresponding settings of the standard MINI Driving Modes for a comfortable or sporty vehicle setup if desired.

Newly compiled trims and equipment packages
allow the configuration of all John Cooper Works models to be easily and specifically tailored to personal requirements. The John Cooper Works Trim is available as an alternative to the standard equipment. This option includes particularly attractive exterior paint finishes such as Chili Red, Rebel Green, Rooftop Grey metallic or Island Blue metallic. It also includes John Cooper Works light-alloy wheels in size 18 inches for the models in the small car segment and 19 inches for the compact top sports cars, as well as exterior and interior surfaces in Piano Black high gloss and Dinamica/leather upholstery in Carbon Black.

The comfort, connectivity and driver assistance equipment packages offered for all John Cooper Works models have also been carefully put together. New to the range for all top sports cars is the Lane Departure Warning system included in the Driving Assistant. In addition, Active Cruise Control now also includes a Stop & Go function for the

It can be used in conjunction with the 8-speed Steptronic Sport transmission and enhances comfort in those situations where a slow flow of traffic temporarily slows down extreme driving pleasure.