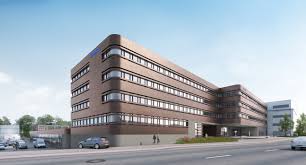 WABCO which specializes in technologies and services to improve the safety, efficiency and connectivity of commercial vehicles has officially opened a Global Technology and Innovation Center in Hanover, Germany. The state-of-the-art center was set up with an investment of USD 30 million. It is meant to expand Wabco’s global product development and engineering capabilities by developing pioneering technologies which will support the automotive industry’s increasing shift to autonomous, connected and electric commercial vehicles.

The facility which covers 11,500 square meters also includes contemporary workspace for over 420 employees who will work out of the Hanover facility as well as engineering project teams visiting from different parts of the world. The facility which will now serve the role of WABCO’s largest Research and Development hub will be the focal point of WABCO’s integrated network of product development and engineering centers which extends across four continents. It will also serve as the center of excellence and domain expertise for WABCO’s global engineering team in order to collaborate on the design and development of advanced safety and efficiency systems for trucks, buses and trailers.

Speaking at the opening ceremony of the new facility, Jacques Esculier, WABCO Chairman and Chief Executive Officer said that the WABCO engineering team’s unique ability to anticipate industry dynamics and innovate ahead of others is a key pillar of its differentiation. He went on to say that the opening of the center marked a significant step to further enhance WABCO’s capacity and capabilities in advanced systems development and integration. The company is now optimally positioned to anticipate and accelerate development of the technologies necessary for higher levels of vehicle autonomy, connectivity and electrification to cater to the needs of its customers.

“For nearly 150 years, WABCO has continuously pioneered safety and efficiency technologies which have led the commercial vehicle industry worldwide,” said Dr. Christian Brenneke, WABCO Chief Technology Officer. “Equipped with state-of-the-art laboratory and testing facilities, this new Global Technology and Innovation Center will be at the vanguard of WABCO’s next generation of autonomous vehicle control and advanced driver assistance technologies, such as active braking, active steering, and electronic stability control.”

Brenneke concluded by saying that with these systems becoming increasingly complex to design and integrate, the new center serve to facilitate even closer collaboration among WABCO’s engineers.