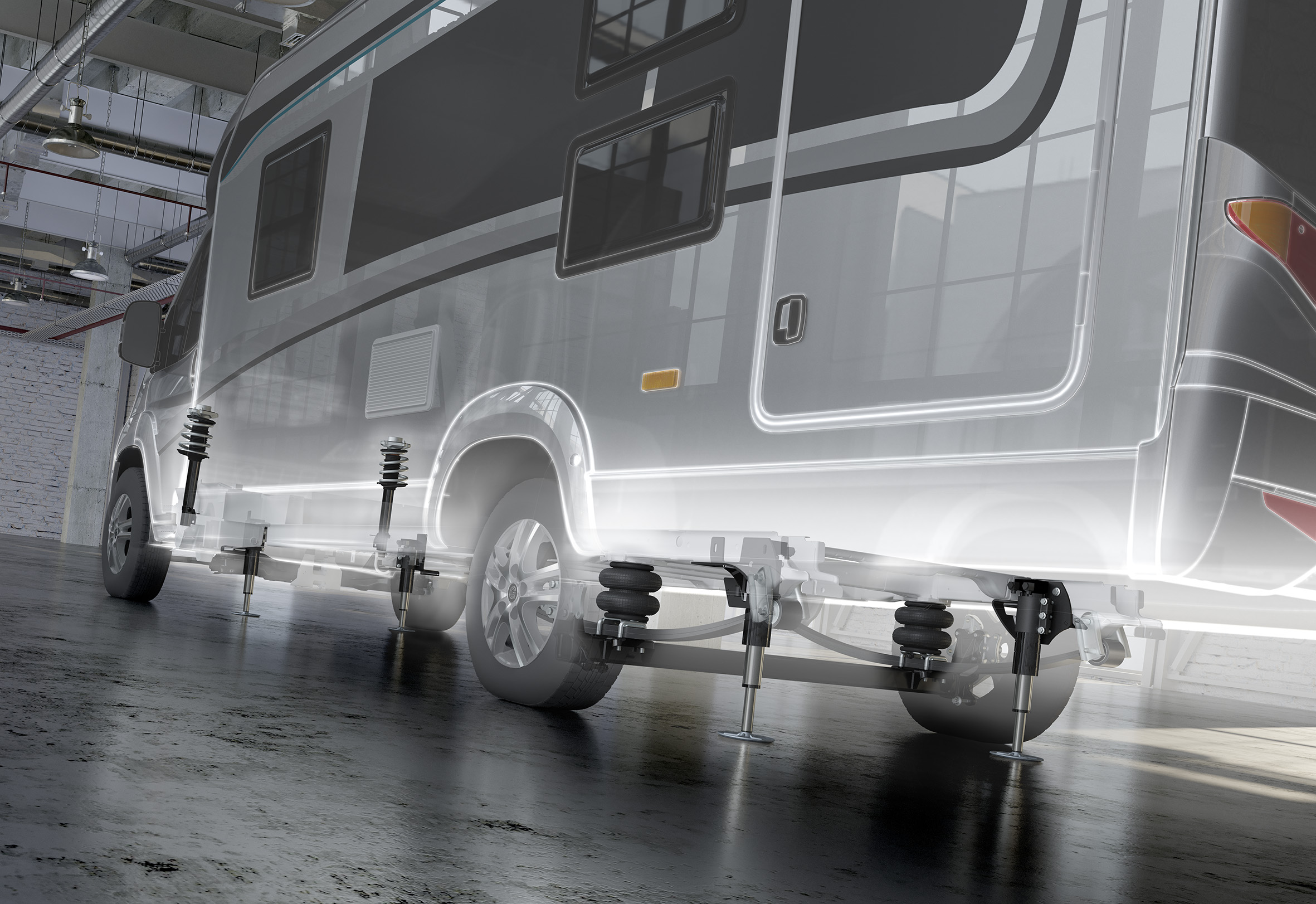 Transporter van models such as the Fiat Ducato, Ford Transit, Iveco Daily and more are manufactured in many different sizes and versions. Despite the countless application areas and industries, however, one area remains mostly untouched by changes and adaptations: the suspension and chassis. When dealing with these important components, vehicle manufacturers usually rely on compromise solutions that satisfy a broad range of people and the maximum possible number of industries and intended uses. Thus the standard suspensions and chassis settings are usually designed for a change between unloaded and fully loaded states. The standard steel springs quickly lose their original resilience when under continuously high loads, as in the case of motorhomes, ambulances, catering trucks, tool trucks and many other vehicles with a heavy interior or vehicle body. Fatigue of the original springs results in decreased spring travel and road clearance. The logical consequence is that the ride comfort and driving safety are tremendously impaired.

For many years Goldschmitt techmobil GmbH, which is headquartered in Höpfingen, Germany, has devoted itself to this very problem and offers retrofittable chassis components as needed. This includes anything from reinforced leaf springs or coil springs for heavy-duty industrial use to complex air suspensions for sensitive rescue and transport operations. For many years, well-known vehicle manufacturers have been relying on the tried-and-tested Goldschmitt technology and have been optimising their tool trucks, municipal vehicles and vending vehicles as well as TV broadcast vehicles, horsebox lorries and motorhomes with spring systems and hydraulic levelling systems from Goldschmitt. Numerous rescue services also have their emergency vehicles equipped with air suspensions or other Goldschmitt technology. After all, the point is to transport severely ill and injured persons gently and safely. But Goldschmitt products stand the test in more than just emergency situations. Transporter vans for persons with disabilities are also frequently equipped with air suspensions. Thanks to the versatile air bellows, the rear end of the vehicle can be lowered as needed. So wheelchairs can be pushed into the vehicle without much effort. Furthermore, due to subsequent installation of a reinforced or additional suspension in conjunction with a wheel/tyre combination with load-bearing capacity, many vehicle models allow for uprating or payload increase. This increases the axle loads or the permitted total weight, thereby increasing the load capacity reserves.

In its more than 40-year company history, the Goldschmitt brand has developed from a small factory into an internationally active company – an innovative chassis specialist and valued development partner for special vehicle, chassis and vehicle body manufacturers that sells its retrofittable chassis products to industrial partners, dealers, workshops and end users in Europe and throughout the world. In addition to numerous Goldschmitt partners who are represented in many parts of Germany and in numerous other countries, Goldschmitt operates three company-owned workshops in Walldürn in the Odenwald, Polch in the Eifel region and Leutkirch in the Allgäu region, which specialise in installing spring and chassis components as well as hydraulic levelling systems. The latter are helpful for levelling out and stably supporting a parked vehicle in a fully automated process. Such systems are in demand, for example, not only for motorhomes, but also for TV broadcast vehicles and other industrial vehicles that absolutely must have stable and level footing.

Goldschmitt has made a name for itself in recent decades, particularly in the motorhome industry, its devoted customers fondly refer to it as a “problem solver” and “chassis doctor”.  As Goldschmitt’s Commercial Director, Markus Siegel, says, “Our customers describe their problems to us and we help with the right medicine, whether they are a manufacturer or end user”.