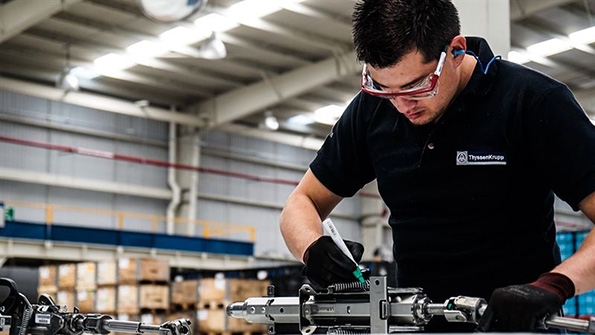 Thyssenkrupp is currently building one of the world’s biggest production sites for steering technology in the Chinese city of Changzhou. A highly automated facility to manufacture steering components and complete electric steering systems is being constructed at the more than 150,000 square meter site and is scheduled to start supplying Chinese and international auto manufacturers in the coming year. thyssenkrupp is investing around 200 million euros in the first phase of the project. The plant will have an average production capacity of about four million electric power-assisted steering systems per year and will create roughly 800 new jobs in the coming years.

Dr. Karsten Kroos, CEO of thyssenkrupp’s Components Technology business area: “We offer our customers the full range of electric steering systems – for lightweight cars, sedans, SUVs and vans. In this and last fiscal year we received orders worth around eight billion euros for this steering technology alone. On this basis we have been further expanding our production network in North America, Europe and Asia in recent months. The new facility in Changzhou will be the central production hub for our steering activities in China.”

In the last three fiscal years thyssenkrupp has invested around 300 million euros in expanding the plant infrastructure of its components business in China. Components Technology supplies its products to customers around the world from the automotive, construction and wind energy sectors and currently operates eleven production sites in China alone.

thyssenkrupp is benefitting in particular from stable growth rates in the Chinese auto industry, where continued annual growth of approximately four percent is forecast. In the 2015/2016 fiscal year thyssenkrupp achieved sales of around three billion euros in China. Roughly a third of this was accounted for by the Components Technology business area, with orders from Chinese OEMs playing an increasingly important part.

“In addition to the big international OEMs, we are also supplying more and more components to Chinese car makers. In the steering business alone, our portfolio of Chinese customers has more than doubled in recent months. That’s why we are increasing the scope of manufacturing at our new Changzhou site and producing the full spectrum of steering technology – from individual mechanical parts to steering columns to electric steering systems. We will also have local development teams there who will adapt our products to the requirements of our regional customers,” says Kroos.

Increasingly thyssenkrupp is looking to fully digitize its production operations. For example, the new plant in Changzhou will feature a permanent automated exchange of information between product, machinery and the central process control system. Targeted digitization of the value chain and the evaluation of large volumes of data from the production processes will improve productivity and product quality. thyssenkrupp is taking this kind of big data analysis a step further by collecting data from all the plants in its steering business as a basis for process optimization.

The steering system is one of the most complex parts of a car. Electric power-assisted steering systems are more energy-efficient than conventional hydraulic steering. Depending on the vehicle, they can reduce fuel consumption by up to half a liter per hundred kilometers driven. In addition they are a technological prerequisite for many electronic driver assist systems such as park assist, lane assist and part or fully automated driving. Based on its electronic steering systems thyssenkrupp is also working on new chassis and steering developments such as steer-by-wire systems, which require no direct mechanical link between the steering wheel and the wheels. Steering commands from the steering wheel are transmitted electronically via a control unit to an electric motor which performs the steering operation.