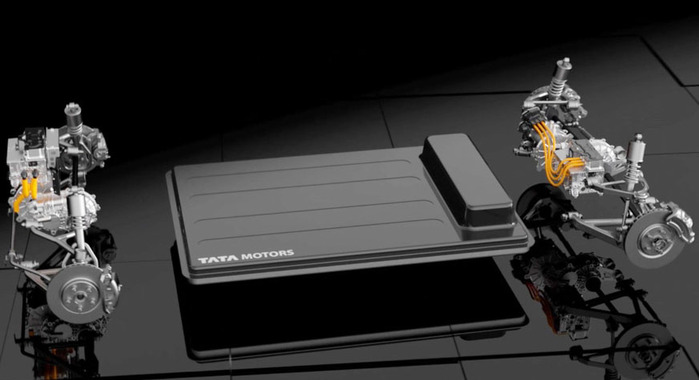 Tata Motors attracted a fair amount of attention from visitors to the Geneva Motor Show, thanks to its EVision Sedan Concept. The concept vehicle not only gave an idea of the design style that will be used for the company’s future EVs, but also showcased the flexibility of Tata’s OMEGA architecture (which is based on Land Rover’s D8 platform) and how it can be easily adapted for EV applications, with changes needed only for the underbody.

Another highlight of the Evision Sedan concept was the battery technology used in the vehicle. The vehicle had a cylindrical-cell lithium-ion battery pack, similar to the design used by Tesla.

According to Guenter Butschek, the CEO and MD of Tata Motors, the battery pack is powerful and makes optimal use of space. It can give a range of more than 300km when fully charged. Butchek said in an interview to Autocar Professional that both the ALFA and OMEGA architecture are battery-electric protected. Without divulging more details, he said that both the battery packs are cylindrical, liquid-cooled and though packed into a smaller space provide a larger range. Tata’s goal is to develop an appealing battery-powered electric vehicle for the Indian market having a range of exceeding 300 km, maybe even 400 km.

In the event that Tata manages to achieve this goal, this would make its new model’s battery comparable to that of the Nissan Leaf (380km under the New European Driving Cycle) and the Hyundai Kona Electric (300km).

Tata has not yet launched any electric vehicles in the Indian market but has won a tender to supply 10,000 EVs to the government-owned Energy Efficiency Services. Tata Motors had launched its Tigor EV and Tiago EV at Auto Expo 2018.