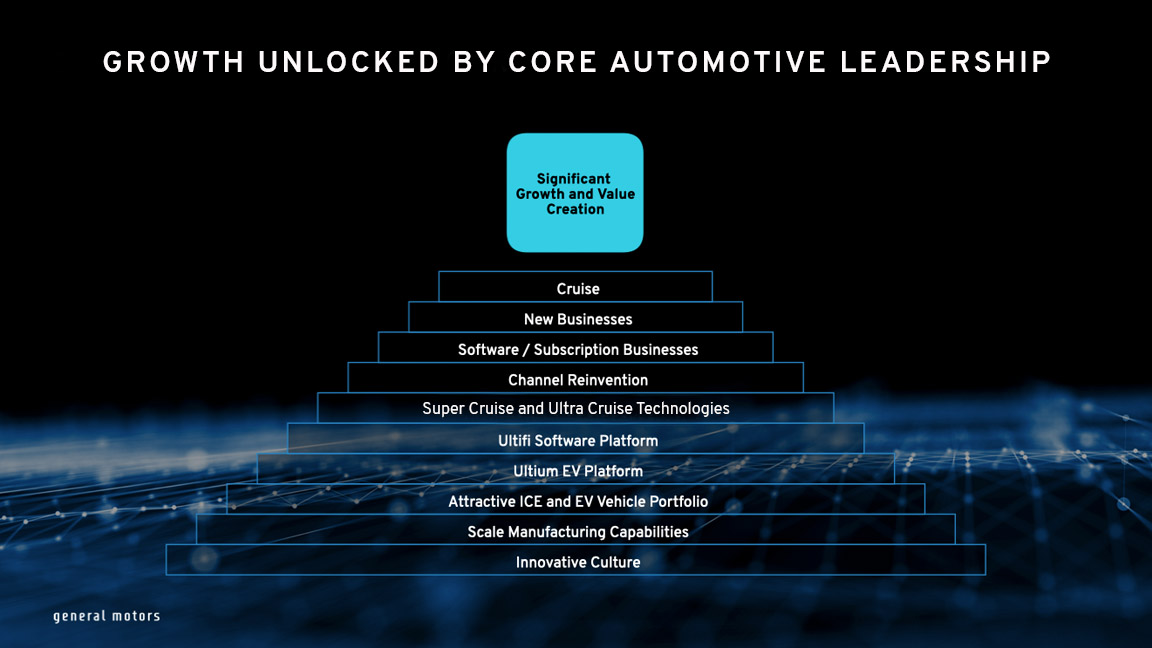 General Motors Co. (NYSE: GM) today at its two-day investor event, provided a detailed roadmap of how the company plans to double its annual revenue and expand margins to 12 to 14 percent by 2030, as a result of GM’s transformation into a growth company driven by EVs, connected services and new businesses.

“GM has changed the world before and we’re doing it again,” said GM Chair and CEO Mary Barra. “GM’s vision of a world with zero crashes, zero emissions and zero congestion has placed us ahead of much of the competition in electrification, software-enabled services and autonomy. We have multiple drivers of long-term growth and I’ve never been more confident or excited about the opportunities ahead.”

GM concluded the first of two days of investor meetings by sharing its growth plans. Leaders – many of whom recently joined GM from other companies – detailed how GM’s compelling hardware and software platforms will combine to create growth, expand margins, add customers and diversify revenues. GM has already announced plans to invest $35 billion through 2025 in all-electric and autonomous vehicles and launch more than 30 new EVs globally. In addition, plans are underway for more than 50 percent of the company’s North America and China manufacturing footprint to be capable of EV production by 2030.

GM’s growth will be driven by the Ultium modular EV platform the company developed to launch a broad portfolio of highly desirable EVs using common, scalable components. The array of Ultium-powered EVs will include high-volume entries, including a Chevrolet crossover, trucks from Chevrolet, GMC and HUMMER, as well as exquisitely crafted Cadillac EVs such as the upcoming LYRIQ and CELESTIQ.

“GM is unlocking a secular growth story that is changing the trajectory of our business,” said Paul Jacobson, executive vice president and chief financial officer. “Simply stated, we are at an inflection point in which we expect revenue to double by 2030 while also expanding our margins. We will achieve this by growing our core business of designing, building, and selling world-class ICE, electric and autonomous vehicles, growing software and services with high margins and entering and commercializing new businesses.”

According to Jacobson, GM’s financial targets include:

During the first day of presentations and discussions with investors, GM leaders described how the company’s Ultium and Ultifi platforms underpin the company’s growth strategy. This includes aggressively expanding digital services and increase the lifetime value of vehicles through Ultifi, an end-to-end software platform designed to unlock new vehicle experiences and connect customers’ digital lives. It will help enable the frequent and seamless delivery of software-defined features, apps and services to customers over the air.

The opportunities are far ranging: