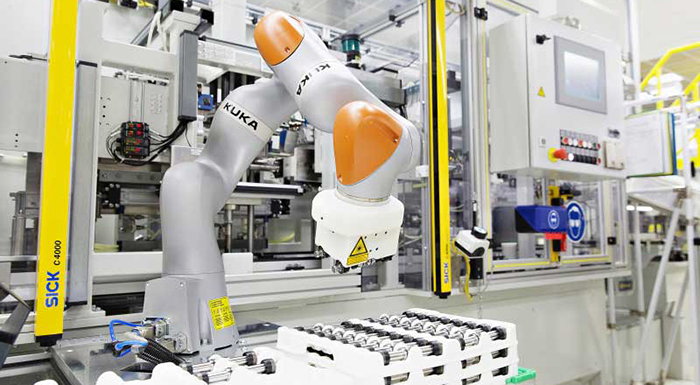 Modern direct-shift production at ŠKODA’s Vrchlabí factory will never be the same again with the advent of a revolutionary intelligent assistant. Thanks to this high-tech, lightweight robot called KUKA lightweight robot LBR iiwa (Intelligent Industrial Work Assistant), employees are able to speed up their work in the ‘gear actuator piston insertion’ production step. This marks the first time that the automaker’s production employees will be working with robots on high-precision tasks.

One of the most meticulous processes in transmission production is inserting the gear actuator piston. With the LBR, employees can now carry out this production step safely and more accurately. It has technical dexterity and low weight of only 23.9 kilograms, making it both accurate and precise.

According to Michael Oeljeklaus, ŠKODA Board Member for Production, the new lightweight robot is a helpful innovation in their transmission production at Vrchlabí, noting that the robot makes what was one an intricate production step for their employees considerably easier and safer. “We are making strides in the digitization of our production. By using the new lightweight robot, our Vrchlabí site is becoming significantly more interlinked.”

Featuring highly sensitive sensors on each of its seven axes, the LBR inserts the gear actuator pistons with the highest precision. These sensors register any potential contact with an employee, thereby always ensuring optimum safety.

The LBR has been rolled out as part of the ongoing modernization of ŠKODA’s Vrchlabí factory. This is where the automaker has been manufacturing the innovative seven-speed direct shift gearbox DQ 200, which is employed in ŠKODA vehicles as well as other brands in the Volkswagen Group, since 2012. In collaboration with the German company, ŠKODA has invested approximately 220 million euros into local DSG production to date.

To date, around 910,000 DQ 200 gearboxes have been manufactured at the site, which employs approximately 1000 people in gearbox production.