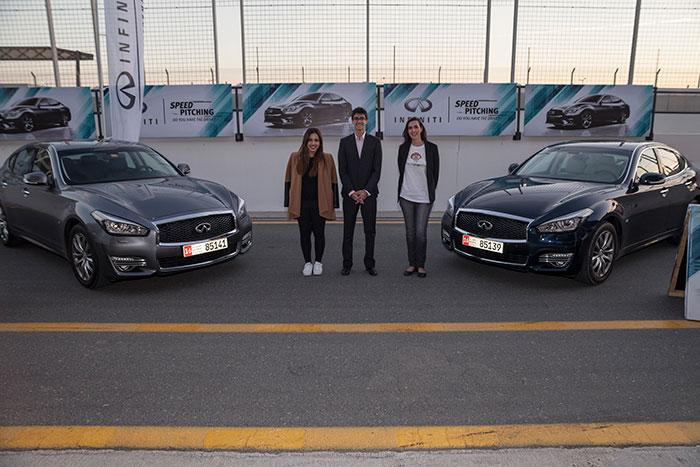 Infiniti, which has become one of the more popular premium brands in the Middle East brought over 30 finalists of the Infiniti Speed Pitching Contest to the Dubai Autodrome for the regional final of the contest.

Commenting on the contest, Juergen Schmitz, Managing Director, Infiniti Middle East said that over 100 applicants across the region had submitted entries on their business ideas in the first round in a bid to reach the finals. The entries spanned a wide range of services, products and sectors.

At the finals which were held on the 9th of December at the Dubai Autodrome, a jury consisting of key industry figures from different sectors evaluated the shortlisted contestants. Each candidate got a chance to pitch their idea for a business to a panel of three judges while they were driven around the track in the rear cabin of an Infiniti Q70.

Based on their performance in this round, 6 finalists were selected from the 30 contestants to speak at length about their ideas to the complete panel of judges in a bid to become one of the final three who would win a trip to Hong Kong.

From the 30 finalists who came to Dubai for the finals, Thea Myhrvold from the UAE, Stefano Fallaha from Lebanon and Zaina Al bader from Kuwait emerged as the final three who will be taken on a trip to the “Infiniti Lab” in Hong Kong for a three-day mentorship program.

The mentorship program will involve extensive coaching and mentoring from Infiniti, Nest and international industry leaders. On the final day of the workshop, the three will be asked to make their pitches for the final time to a panel of judges consisting of senior Nest & Infiniti executives in order to select the winner of the contest who will receive USD 40,000 as seed level funding.

The infiniti Speed Pitching contest received entries across the GCC (including Lebanon and Jordan). Contestants were asked to come up with an intelligent, well crafted startup ideas related to any product or service in any industry, service. Their business and related activities were expected to have a clear regional focus.

With the regional speed pitching contest, Infiniti is definitely enhancing its image as a premium brand by giving a helping hand to budding entrepreneurs.