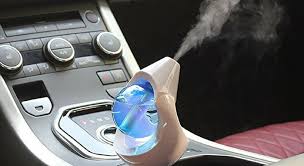 Scientists at Sussex University in the UK have performed research that indicates that the use of rose-scented air fresheners in cars can reduce accidents by a staggering 64 per cent. That may not make much sense, but it does seem that use of specific scents can have a significant impact on safety.

The team of scientists at Sussex University who worked on the project found that when they sprayed a pleasant, calming smell like rose-scented air fresheners in driving simulators, it affects the environment in the car and had a calming influence on the driver, thus reducing the possibility of an accident.

The scientists conducted the experiment by using a laboratory driving rig, in which they connected a spraying device to the center of the steering wheel. When the car approached a hazard in the road like a cyclist moving erratically in front of the car or a vehicle pulling out sharply, the spraying device released a fragrance. The fragrances that were used as part of the experiment ranged from rose to lemon and civet. Civet is a musky smell that is generally used in the perfume industry.

After performing the study, they found that the scent of rose reduced accidents by 64 per cent. It was the opposite in the case of the musky aroma, as it actually increased accidents by 46 per cent. Of our five senses, the sense of smell is thought to be the oldest sense and generally people react more quickly to olfactory stimuli than to visual or auditory information.

Thus, the research team reached the conclusion that creating smells in cars can alert the brain regarding a potential danger more quickly than a visual warning.

The new system they have developed cannot yet be used in a real-life situation as they still need to come up with some kind of artificial intelligence device to detect the potential for a dangerous situation on the road.

Many vehicle manufacturers already offer ‘fragrancing systems’ which produce different scents with just the touch of a button.

Dmitrijs Dmitrenko, a doctoral researcher at Sussex University said the idea behind the project was by the use of different in-car perfumes in the automotive industry.

+2
Dmitrenko went on to explain that smell is very hard to investigate and to control. People have very individual preferences when it comes to scent and it is not easy to produce just the right scent that will appeal to the majority of consumers.

The team at Sussex University has made a good start with the equipment that it has built to emit scent when a danger is sensed. Though smell does take a while to reach the nose, once it has reached the nose, it is quicker to reach the brain that auditory and visual stimuli. Using a rose scented air freshener continuously would not have the same effect as the nose quickly becomes habituated to a continual smell. But a puff from time to time is noticed, according to the researchers.

The research team at Sussex University is hoping that their project attracts attention from leading vehicle manufacturers across the globe.