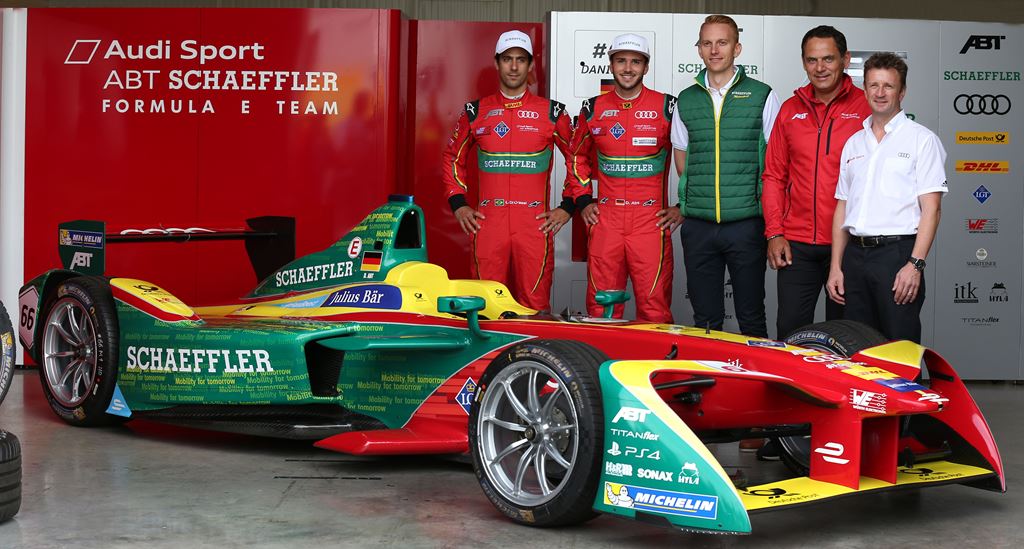 Schaeffler to Work with Audi on powertrain development

Schaeffler has signed an agreement for extensive cooperation with Audi in the development of the powertrain for the next three generations of the Formula E race car. Schaeffler Chief Technology Officer Prof. Peter Gutzmer and Peter Mertens, Member of the Board of Management, Technical Development AUDI AG, signed the three-year agreement in Berlin-Tempelhof.
Schaeffler has been highly involved right from the beginning in the innovative Formula E racing series for electric vehicles. The company has worked on designing, developing and building the powertrain for the only German Formula E race car in the international field and has collaborated closely with Team ABT from the 2015/2016 season. With AUDI AG entering the series with a factory-backed commitment in the fourth season which begins in the fall of 2017, Audi and Schaeffler finalized a three-year technology cooperation up to and including the 2019/2020 season. The two companies will work together on the electric motor, suspension and power electronics for the powertrain.

Audi has already finalized the basic concept for the next-generation powertrain of the Formula E race car and has begun testing some of its components. For previous editions of Formula E, Audi had worked with Schaeffler on some areas behind the scenes. This partnership has been taken to the next level with a long-term perspective with the two companies officially signing a technology partnership.

Commenting on the partnership, Schaeffler’s Chief Technology Officer Prof. Peter Gutzmer said that he was delighted at formalization of the closer partnership with Audi in Formula E. The two companie shacve been cooperating for many years in the field of motorsports as well as in the design, development and manufacturing of components for production cars. He went on to express his confidence that ABT Schaeffler Audi Sport will continue to be a success story.

Schaeffler has not only played an active role with regard to Formula E, but is also a pioneer in electric mobility for the road and has been actively focusing on research and development in this field. The company recently doubled its development team dedicated to components for electric vehicles and now has direct access to know-how from the race track for its projects.

Schaeffler has a wide range of products for electrifying the entire powertrain, ranging from starter-generators, to 48-volt systems through to wheel hub motors and E-axles. Schaeffler is also developing electric vehicle concepts smaller than an automobile like the Bio-Hybrid for mobility. The Bio-Hybrid is a four-wheel Pedelec with weather protection and the E-Board is a similar vehicle for urban areas.

Prof. Peter Gutzmer said that rhe Formula E commitment would help Schaeffler to gain a better understanding of the electric mobility environment and systems on both a large and small scale.