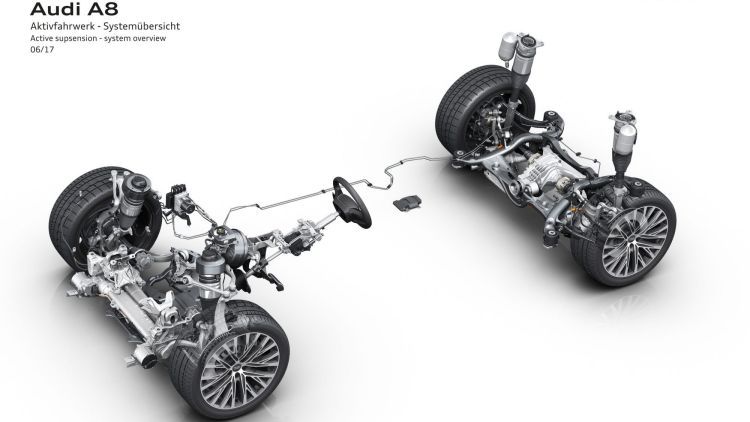 Audi has unveiled a world-first suspension system for its flagship A8 model which promises to sense the road ahead, reduce the impact of a crash and make the ride more comfortable when it appears on the retail scene in 2019. In the leadup to the official global debut of the car, Audi revealed details of the full-sized sedan’s suspension.

The core of the model is its 48-volt electric architecture that can support more powerful electronics than current systems. Audi first offered 48-volt systems on its SQ7 performance SUV in which the electric system is used to power an electric turbocharger. The new A8 takes this technology further.

All the four wheels on the A8 are linked to the suspension in addition to being equipped with a powerful electric motor that can exerting 1100Nm of force through a system of gears, rods and levers. The motors do not drive the wheels but instead apply force as needed to control the movements of the car by reading the road ahead. The passengers benefit from a more comfortable ride than when compared to a vehicle which has conventional air suspension. The electric suspension makes the ride smoother by offsetting the body roll when cornering or pitching under acceleration and braking. This system works in tandem with the new four-wheel-steering to give the vehicle a smaller turning circle than the A4, making the car more flexible than expected in view of its size.

Another notable characteristic of the A8’s suspension is that it has the capability to minimize the effect of potentially fatal side-impact crashes. If the sensors that surround the car warn that it will be a T-boned impact, the suspension will raise that particular side of the car by 80 mm to try and absorb the maximum impact of the crash energy through the robust elements of the door sill and underfloor, rather depending on only the door structures to do this.

Audi has not disclosed the complete details about the A8. But the model definitely takes the brand one step closer to autonomous driving while offering technologically innovative interior electronics and a range of efficient engines.