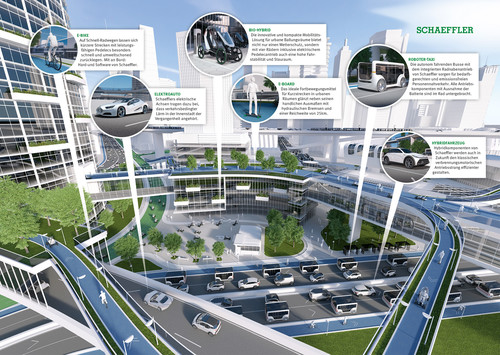 Schaeffler has said that it would be showcasing its “solutions for Mobility for Tomorrow and change” at the Consumer Electronics Show which will be held in January in Las Vegas.

“We are showing how the visions for autonomous driving, electrification and networking can be made a reality,” Peter Gutzmer, the company;s deputy CEO and chief technology officer. “The automotive industry is undergoing a dramatic change in which we are playing a role as a development partner.”

A major attraction at the Schaeffler booth would be the bio-hybrid, a compact “mobility solution” for urban areas. This vehicle is a covered mini-model which offers occupants complete protection from inclement weather while the four wheels provide high driving stability. It is ideal for cramped urban spaces with a length of just over two meters and width of 85 cm. The vehicle is powered by an in-house-designed electric powertrain.

According to Gutzmer, the mobility requirements in urban areas will change in the future and the company’s ready-to-go prototypes will highlight at the show that Schaeffler has the capability to not just make prototypes but actual products that are in tune with this change.

Schaeffler is also well aware of the changes that will be needed at the component level as is evident from its digitalisation concepts. The rolling bearing, which is the company’s core product, has now transformed into a sensor for future networked automobiles. Sensor coatings that have been incorporated in the bearings at a microscopic level will give them the ability to measure torques, revolutions, forces and temperatures in future. This will serve as a source of valuable data.

Gutzman feels that the automobile will soon become part of the internet of things and Schaeffler’s sensor bearings which are likely to be used for all components which move and forces which occur, will be able to provide fleet managers, drivers, and garages with first-hand data.

Electromechanical actuators, like the active roll control system that has already gone into production at Schaeffler, will be able to provide data to the internet of things in the future. The active roll control system offsets movements in automobile chassis which are caused by driving around corners or on uneven road surfaces. When the system is used in combination with a highly accurate satellite navigation system, intelligent wheel bearings, and a communications module, in the near future, it may contribute to producing a real-time image of the condition of the road. This information can then be used to provide updates to drivers who are following or to the infrastructure operator.

Another area Schaeffler will be focusing on would be transmissions for the future, electrified generations of vehicles like those for self-driving taxis which can make their own way through crowded cities. In such a scenario, except for the battery, all the drive components would be located within the wheel. These vehicles would be able to offer users an extremely good usable space/footprint ratio while also being highly maneuverable.

“The urban spaces of the future will require the smallest possible traffic footprint with the maximum mobility,” said Gutzmer. “Innovative drive concepts such as the wheel hub motor make new types of mobility possible and are extremely significant components as far as digitalisation is concerned.”

Even in conventional vehicles, the level of electrification is increasing and Schaeffler will present technical solutions needed for this at CES. These solutions range from 48V technologies, through high voltage modules for plug-in hybrid vehicles, to electric axles for purely electric vehicles.