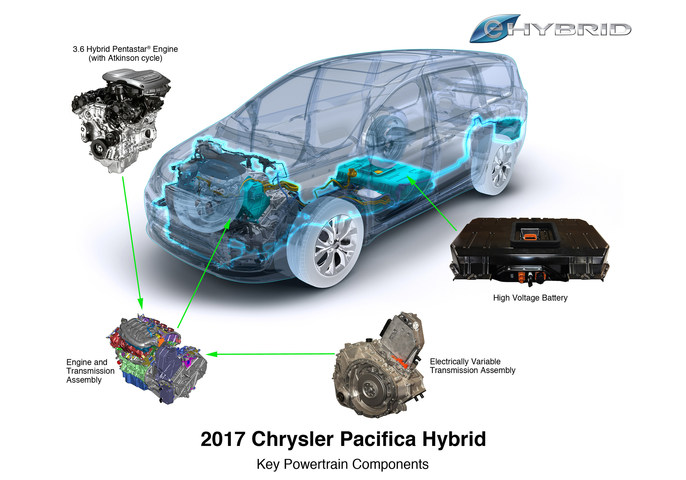 FCA’s innovative 3.6-liter Pentastar V-6 hybrid propulsion system has been named as one of the engines in the 2017 edition of Wards list of 10 Best Engines. The new 3.6-liter Pentastar V-6 hybrid propulsion engine will be making its debut in the 2017 Chrysler Pacifica Hybrid, and plays a role in making it the most fuel-efficient minivan ever to benchmark performance numbers, including a fuel-economy rating of 84 miles-per-gallon-equivalent (MPGe), indicative of the vehicle’s combined city- and highway-cycle performance in electric-mode only. The can also excelled when it came to two other parameters of efficiency, with recent testing by the U.S. Environmental Protection Agency (EPA) showing that it had a total driving range rating of 566 miles and electric-only range rating of 33 miles.

Speaking about the selection of the engine for Ward’s list of the 10 best engines, WardsAuto Senior Content Director Drew Winter said that the team was wowed by the Chrysler Pacifica Hybrid’s seamless operation. The eFlite transmission shifts smoothly between pure electric mode and a combination of electric and gasoline engine propulsion. He added that FCA’s powertrain engineers put in a lot of hard work to make the company’s first plug-in hybrid minivan a success by reworking the V-6 engine for a hybrid application, but developing an innovative transmission inhouse that can effectively coordinate power from two electric motors and the gasoline engine.

eFlite, the electrically variable transmission that is used in the Pacifica Hybrid was developed in-house by a team of engineers that dealt exclusively with the task of delivering a high-efficiency powertrain within the parameters that customers expect from minivans.

In conventional hybrid vehicles, one motor serves as a generator and a second motor, which is usually much larger delivers torque to the wheels. The new eFlite system uses a one-way clutch to allow a motor that is typically used only as a generator to also deliver torque to the wheels, depending on driving conditions. This leads to higher efficiency, refinement and better component packaging.

Bob lee, Head of Engine, Powertrain and Electrified Propulsion, and Systems Engineering, FCA – North America said that the company was very proud that its newest hybrid propulsion engine made it to the Wards 10 Best Engines list.

He added, “The latest version of the three-time Wards 10 Best Engines family runs on an Atkinson combustion cycle and when paired with our new eFlite dual-motor electrically variable transmission, delivers class-leading efficiency and refinement for our minivan customers.”

The Pacifica Hybrid has maximum space in the rear cargo area as its 16-kWh lithium-ion battery pack is located under the second-row floor and this allows the model plenty of room for seven passengers and helps it to retain the third-row Stow ‘n Go seating and storage. Recharging takes minimal time of two hours using an optional 240-volt (Level 2) charger, which is available from Mopar through dealers. If a 120-volt (Level 1) charger, which is provided as a standard option with the vehicle, the Pacifica Hybrid can be fully recharged in about 14 hours. The vehicle’s battery would also get charged through regenerative braking.

When the energy in the battery is depleted to a certain level, the Pacifica Hybrid becomes a part-time electric vehicle, like a conventional hybrid, in order to maximize its energy and efficiency. The wheels get power from the electric drive system and this is also supplemented by a specially adapted new version of the award-winning gasoline-powered Pentastar 3.6-liter V-6. In its Green Vehicle Guide, the EPA gave the all-new minivan a rating of 10 based on its performance when it came to fuel economy and greenhouse-gas emissions.

In the 22 years since Wards 10 Best Engines was established eight engines that were made by FCA US and its predecessor companies have bagged 17 awards.