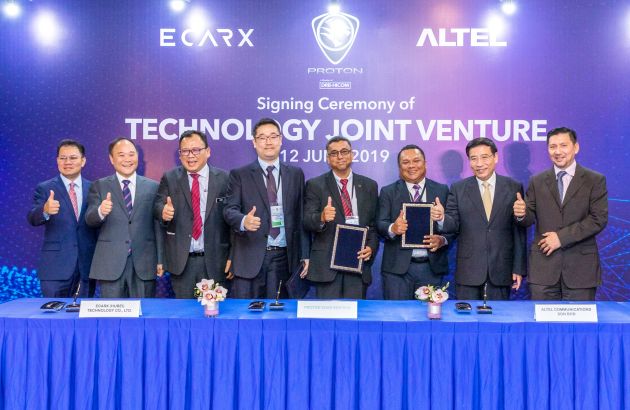 Proton has entered a joint venture with two companies for the development of car connectivity tech and products for both local and regional applications. Proton Edar finalized the joint venture agreement local telco company Altel Communications and Chinese firm ECarX (Hubei) Technology in the presence of

The new JV is expected to drive automotive sales in the future by opening up the possibility of having local R&D and production of car connectivity solutions and digital services. The areas of coverage will include the development of network connectivity management and telematics services for Proton cars.

For Proton, the joint venture will significantly increase the level of local content, especially for the Proton X70. Back in April, Proton chairman Datuk Syed Faisal Akbar had said that the Geely Smart Ecosystem (GKUI) infotainment system on the X70 would be updated and revised for local customers.

It is expected that as part of the localization map content would be revised for the navigation function. In the CBU X70, the maps were based on a Baidu version developed in China. Models such as the 2019 Proton Iriz, Persona and Exora RC also had GKUI-based infotainment systems, and are also expected to benefit from the move.

The decision to localize research and development is expected to reduce cost and minimize dependability on foreign parts. It is also expected to promote the use of ‘Hi Proton’ in export markets, especially in the ASEAN region, where customization can become easier fashion with local R&D and drive sales.

“Collaborations such as this will allow us to gain a foothold in the rapidly progressing area of car connectivity solutions while also increasing the knowledge base of our R&D engineers. It also allows us to explore the possibility of expanding our connectivity solutions to Proton’s export markets, particularly in neighboring ASEAN countries,”  Proton chairman Datuk Syed Faisal Akbar said during the signing ceremony.