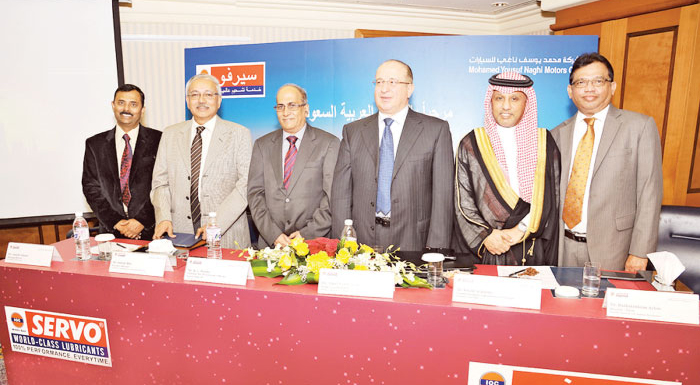 Aiming to double its lubricant business worldwide, Indian Oil’s SERVO brand, the leading brand among lubricants and greases in the country, has recently forayed into Saudi Arabia by announcing a collaboration with Mohammed Yousef Naghi & Brothers Group.

Speaking about the entry of SERVO world-class lubricants into the Saudi market, K.L. Murthy said that the debut of SERVO products in Saudi Arabia for them comes as an extremely critical stage in their global expansion and they look forward to their collaboration with Mohammed Yousef Naghi Group in a step to further expand their range of offerings in Saudi Arabia.

Along with senior company officials, Murthy addressed a press conference where he talked about the company’s growth in the region and its upcoming expansion.

Murthy noted that the new expansion in Saudi Arabia would pave the way for SERVO lubricants to be available in 27 international markets. “SERVO aspires to meet the discerning needs of all segments of customers in Saudi Arabia, especially in industrial oils, automotive oils, marine oils and greases.”

He added that in Saudi Arabia, they look forward to a long-lasting association with Mohammed Yousef Naghi Group to take the SERVO brand further among the discerning customer base in the country.

According to Khalid Al Harthy, in view of the keen desire of Mohammed Yousef Naghi Motors Company in offering extra unique services to their customers in the area of after sales services, they found that the collaboration with Indian Oil Corp. is an outstanding opportunity to attain this goal. “In the light of the high demand for aftermarket services in Saudi Arabia, especially in the automotive sector, we found SERVO oils, one of the most important products of Indian Oil Corporation and we are sure it will be successful and accepted by our customers because of its high quality and competitive prices.”

Commenting on SERVO’s operation in Saudi Arabia, Amitabh Akhauri said that in the first year of operations, the company is aiming a volume of approximately 500,000 tons and seek to capture with this collaboration a five percent market share.

Through the years, SERVO has grown to be the top lubricants brand in India, which is one of the fastest growing economies of the globe, registering remarkable growth in a number of key sectors. The brand has also carved out a substantial niche in multiple international markets, with strong presence in Africa, West Asia and Southeast Asia.