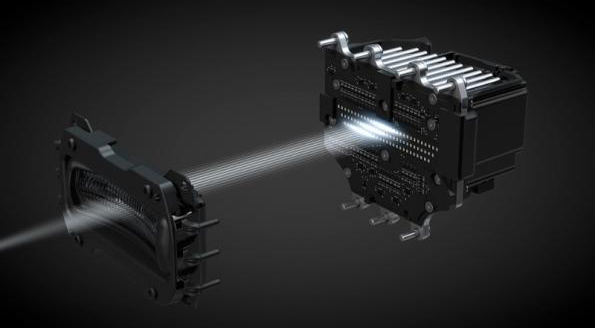 New Mercedes-Benz E-Class to Debut with a World First

The automotive world is now on the lookout for the launch of the new Mercedes-Benz E-Class which is said to feature a world first: three-layered multibeam-LED headlamp developed in collaboration with German lighting and electronics company HELLA.

The advanced three-layered display comes with 84 inpidual controllable LEDs per headlamp that vary light distribution depending on weather, road and traffic conditions. The integrated adaptive High Beam Assistant Plus enables for more frequent use of the car’s high beams, providing greater safety and comfort.

Compared to static high-beam headlamps, Daimler’s adaptive high-beam function can selectively mask light patterns directed at oncoming vehicles within a fraction of a second. The system employs a windshield-mounted camera to evaluate the driving environment. It also blocks light aimed at an oncoming vehicle, but illuminates the areas adjacent to oncoming traffic. Moreover, it offers maximum illumination of the roadway for the driver and inhibits glare for oncoming drivers.

What’s more, there is an adverse weather light that reduces glare from the roadway when it is raining by particularly dimming inpidual LEDs in the low beam. Above the main headlamp are two light guides that produce the direction indicators, position lights, and daytime running lights. Transparent silicone plastics are also utilized as the key optics for an LED headlamp, directing the light from the 84 inpidual LEDs to the front lens which is itself tucked behind a focusing outer lens of the LED headlamp module.