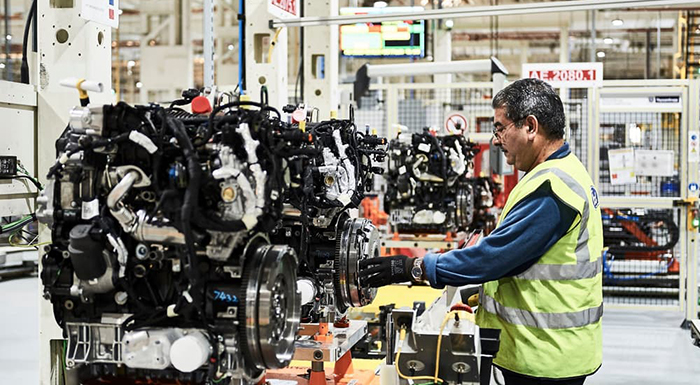 New Ford Engine is Being Built on a New Production Line

Ford launched earlier this year its all-new EcoBlue diesel engine that displays efficiency facts and saving stats. The American automaker has now disclosed that the engine is not only efficient to run but also to produce, with the latest production line at its Dagenham Diesel Centre which reportedly reduces energy and water use by 50 percent.

Headquartered in the UK, the Dagenham Diesel Centre is Ford’s grandest diesel engine production facility worldwide and, before the EcoBlue diesel, was being used to produce its 1.8-l TDCi diesel engine. However, a newly installed advanced production line has started knocking out 350,000 of the new EcoBlue engines, with that figure expected to climb 500,000 when a second phase of production starts next year.

Ford says that the amount of water utilized per engine at the facility will be among the lowest at any of its plants worldwide, with 17.5 million liters less used yearly than in 2011. Nearly 16 million liters of that will be down to the minimum quantity lubrication (MQL) machining tools being utilized on the new line.

Fine oil mists are utilized in cooling, lubricating, and cleaning the new machines during the metalworking process, rather than high volumes of coolant. Hence, they are said to utilize 99.8 percent less water than those they have replaced.

Ford continuously reveals that the reduced amount of coolant being pumped around the facility is also helping to cut the amount of energy being used, with three smaller coolant systems requiring approximately 70 percent less energy than what was previously installed. The installation of LED lighting has also contributed to the reduction of energy use, saving just shot of 750,000 kWh annually.

Several other initiatives at the Dagenham facility are also helping to boost its green credentials. Ford is now sending “zero waste to landfill” there and at its other 11 European production facilities. New technology suggests that engines can now be tested without being started, saving 11,000 gallons of diesel a year, and advanced tooling is enabling to reduce component rejection rates. There are also three wind turbines installed to contribute to the facility’s power requirements.

The powerful EcoBlue diesel engine will be featured in the new Ford Transit and Transit Custom.