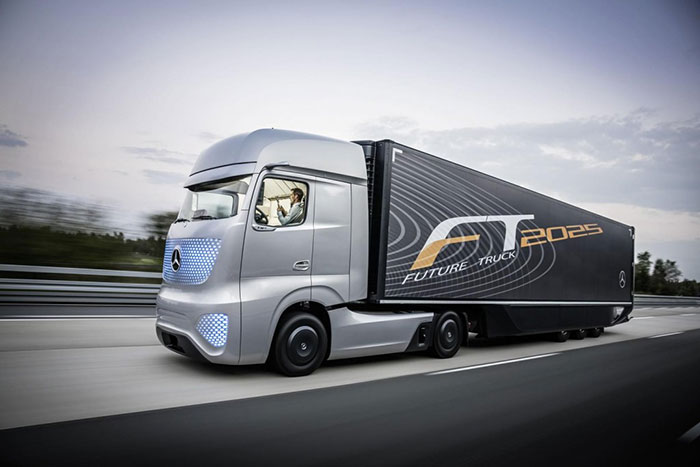 The new trend of autonomous driving is not restricted just to cars. It looks like we will soon be having autonomous trucks on the roads. The recent trends in the truck industry reflect practical considerations as well like the desire among truck manufacturers to become more environment friendly and cost efficient through innovations to decrease emissions and increase fuel efficiency. Many such innovations will be showcased by the over 1,000 exhibitors who will be participating as part of ‘Truck Competence’ at the 2016 edition of Automechanika Frankfurt which is scheduled to be held from 13 to 17 September, 2016.

Changes in the trucking industry point to four key areas – Weight saving, reduction of CO2 emissions, electronics and networking. The new developments in these areas would translate into significant savings for fleet operators and transport companies. Many of the components, assistants and systems needed for the practical implementation of these innovations are already available and have undergone significant testing. Once they have been implemented, these changes would mean that the trucks of tomorrow would be able to carry heavier payloads, consume less fuel, would offer greater operational availability and would be more economically efficient. They would also be safer and would have less impact on the environment thus benefiting other road users including pedestrians, due to their resource-friendly drive systems and lower emissions.

In 2016, the trend of using lighter components to make lighter trucks continues, as this would mean trucks can handle higher payloads or use less fuel for the same payload. A lower unladen weight would make trucks more efficient and begins right from the component level, like the axles and the brake systems. One of the participants in Automechanika is Knorr-Bremse. The firm claims to offer a ten percent reduction in weight for its new ST7 trailer brake system, in comparison to the previous model. Those who make engine components, chassis and truck bodies also claim to have made major weight reductions in their latest product range. The ‘downsizing’ trend is evident in the case of truck and van engines, with smaller engines offering the same power.

Start-up company CarbonTT says it will set a new benchmark in the trucking sector by offering weight saving of almost 50 percent. Working out of the Airbus Composite Technology Centre in the North German town of Stade, the company specializes in lightweight materials inspired by innovations in the aircraft industry. They have developed processes for the mass production of large-scale carbon parts for the truck industry. The company has designed a refrigerated box body made of carbon, and is scheduled to make a presentation at the ‘Tomorrow’s Service & Mobility’ section at Automechanika 2016. The company has already designed a light commercial vehicle with a gross weight of 3.5 tonnes, which has a refrigerated body having a payload of 1,500 kg. This is almost 500 kg more than a conventional refrigerated vehicle and points to a major development in this regard.

Another start-up which will be showcasing its wares as part ‘Tomorrow’s Service & Mobility’, is Orten Electric-Trucks. Established by body manufacturer Orten in 2015, the company makes electric drive systems for conventional light commercial vehicles and 7.5 tonne trucks. In combination with an extra-lightweight body that Orten developed, the resulting vehicle is ideal for city-center distribution, and offers users the benefit of zero local emissions and payloads as high as those for diesel vehicles in the same category over distances of up to 100 km. The latest specimen is the E 75 AT, a 7.5 ton truck based on the Mercedes Atego, which has fast-charging lithium iron phosphate batteries and a high-torque electric-synchronous motor that work in tandem to create an output of 90 kW / 122 hp.

Such delivery vehicles which can cover small distances in a city can be easily used for fully electric operations and, though they cost a bit more, the first series-production trucks are already operating in many European cities.

In addition to electric vehicles, petrol, CNG (Compressed Natural Gas) and LNG (Liquefied Natural Gas – natural gas liquefied by cooling) are emerging as better alternatives for diesel vehicles when it comes to trucks that operate on long routes. Viable engine technology for these alternatives is already available.

Another target area for system and component suppliers is technology to lower emissions and thus fuel consumption. Generally, they have switched to electronically controlled engine and ancillary components that operate solely on demand and only then consume power. These include ventilators for engine cooling, via coolant pumps, to oil pumps and air-conditioning compressors. The latest innovation is the use of energy made by rolling downhill for recharging fast-charge batteries, heat accumulators or compressed-air tanks.

Additional fuel-saving opportunities are offered by new cruise-control systems or GPS-aided speed regulators that not only maintain the speed set but also, via GPS, compare the position currently reached with the topographical material stored in the system and thus anticipate gradients better than a driver ever could, like coasting before the descent. Many new trucks already have these systems under resonant names like Predictive Powertrain Control (PPC), Efficient Cruise, Active Prediction, I-See and Predictive Cruise Control.

Assistance systems have become increasingly popular in the truck sector. While a few like electronic anti-skid systems, automatic emergency braking systems and lane assistants have become mandatory for heavy commercial vehicles, others still under development include a new emergency braking assistant with pedestrian recognition from Daimler for its Actros trucks. ZF has teamed up with Wabco to debut a new electronic evasive manoeuvre assistant for trucks, which will be unveiled at Automechanika Frankfurt 2016. The system can automatically detect a stationary obstacle, and, if there is no room for an emergency stop, steer the truck around it, while a customized stability programme prevents the vehicle tipping over, jack-knifing or skidding. Another ZF system named the ‘Highway Driving Assist’ (HAD) is a lane-control system that was initially developed for cars and has now been adapted for use in trucks. In addition to warning drivers before the vehicle leaves the lane like conventional lane assistance systems, HDA also actively and independently steers the vehicle to keep it in the lane.

When it comes to trucks, the emphasis is more on ‘semi-autonomous driving’. The transition to a fully autonomous truck can be completed only when in addition to having all kinds of electronic assistants, sensors, processors and motors, trucks are also able to communicate with their surroundings. A truck should be able to communicate with other vehicles in its vicinity so that it has sufficient information to operate autonomously. This feat has already been achieved technically.

This spring, six European truck manufacturers drove in columns (platooning) from their various headquarters to Rotterdam as part of the ‘European Truck Platooning Challenge’. The trucks participating in the event were networked via WLAN, and continuously exchanged data with each other. Hence it was possible to electronically link them with each other with only a small gap of about 15 meters between each truck, with only the first vehicle being actively controlled by a driver. The other trucks followed automatically with no compromise in safety due to the networking and the resulting synchronisation of the assistance systems. Platooning offered another advantage, greater economy and environmental friendliness, as trucks can achieve fuel savings ranging from two to eleven percent, depending on their position in the column.

This feat increased the possibility of achieving the dream of fully autonomous trucks in the near feature a distinct possibility. Due to the employment of modern materials, new technologies, and networked systems and vehicles, the 2016 edition of Automechanika Frankfurt holds out the promise of trucks that have lower emissions, offer greater safety, higher payloads and are more autonomous in the years ahead.